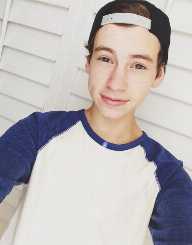 At only 21 years of age, Calvin Vail has proved to the world that everything is entirely possible to a willing heart. He is widely known as a comedian and active You Tuber. He goes by the name LeafyIsHere on his YouTube Chanel. He is powerful persona in social media who likes to upload compelling and entertaining videos.

Calvin Vail represents his videos with gameplay footage that he typically acquires from a variety of video games. This type of footages illustrates or addresses different topics from relationship to his personal life. He also loves to narrate a story as well as having a witty conversation. Let’s just conclude that he is a guru when it comes to interacting and social networking. Not to mention he is quite right when it comes to mocking other YouTubers.

Calvin Vail aka Leafy seems to have had a challenging family background that resulted in drug abuse. It reached a point where his dearest father tried to commit suicide. In all, Calvin made himself busy with video games, and it was in the middle of all that he began to upload video games on social media.

His YouTube channel and gameplays became his fountainhead for nothing else than consolation that he once lacked at home. It was on these platforms that he expressed his natural feeling as well as welcoming his fame along. However, Calvin prefers to live a life of his own. He loves to adventure a lot but hates to disclose his private life to the public.

As previously mentioned Calvin Vail has created a social life in his way. Although he prefers his own time, he loves to spend time with his friends and fans. He perfectly knows how to come up with a witty conversation that entertains a whole lot of social media fraternity. In his videos, he likes to play or feature as Leafy and at times as Calvin. The internet projects his different sides of traits that will be quite hard to interject in real life.

All along Calvin has proved that the web is an atmospheric domain for nothing else than creativity. After all, if it weren't for internet Calvin Vail wouldn’t be known as a star. Probably he could have turned out like his father, but all thanks to the power of heightened technology that he is now a brilliant lad. As a result, he is currently known as a loyal and comical guy with a vast fan base.

His nobility comes from the way Calvin Vail expresses himself as well as how he uses different Media. Tons of fans are always eager to view his distinctive styles that are entirely known as one of a kind.

It was recently announced that LeafyIsHere got himself into arguments with another YouTuber called TommyNC2010. Calvin has been severally accused of undermining other YouTubers with his comments and views. He loves to comment on other people’s platforms, but he harshly does this. Criticism embraced his life when he mocked TommyNC2010.