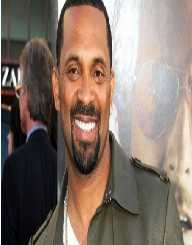 Mike Epps was born on November 18, 1970, to Tommy and Mary Epps in Indianapolis, Indiana. He has eight siblings. As a child, his parents recognized his talent early on and encouraged it. He was constantly telling jokes and playing pranks which sometimes went too far. He once spent time in Juvenile Delinquent Center for an overdone prank. He glued the hands of one of his friends together with super glue.

Mike soon gave in to vices like dealing drugs, and he spent some time in prison. He eventually entered a contest to do stand-up comedy at Seville’s, Indiana. He moved to Atlanta trusting in his talents with 80 dollars in his wallet to pursue his career. He worked in a manhole in the day and did stand-up at night. He worked at the Comedy Act Center which held amateur nights on Tuesdays. He looked up to people like Richard Pryor, Redd Foxx, and Bill Cosby and they had a bit of influence on him.

At the age of 21, Mike Epps moved to Brooklyn, New York at the suggestion of the owner of the Comedy Act Theatre who believed in his style and unique talent. Getting to New York and breaking into the big leagues was hard but he found an underground black comedy scene, and he joined. Soon, he starred in two of the Def Comedy Jam broadcast in 1995.

His first movie role was in Strays which also happened to be the first movie that Vin Diesel would direct. This was in 1997. His big break came through Ice Cube in 1999 as Day-Day Jones in the sequel, Next Friday. Next Friday was the sequel to Friday, and Mike Epps played Ice Cube’s cousin.

In 2001, Mike Epps was the voice over of Sonny the Bear in Dr. Doolittle 2. He also featured in other comedy movies like Redman and How High that same year. In 2002, he played a thief, and Ice Cube was his bounty Hunter in All About The Benjamins. He also reunited with Ice Cube for the third movie, Friday after Next also in 2002. In 2004, he played L.J in Resident Evil and 2007 Resident Evil: Extinction. He also played Ed Norton in The Honeymooners (2005).

2008 saw Mike as the voiceover for Boog in Open Season 2 after Martin Lawrence turned down the role. In 2010, he hosted the 2010 BET Hip Hop Awards and performed a stand-up comedy special, Under Rated and Never Faded.

In 2009, he played Black Doug in The Hangover. Black Doug was a friendly drug dealer. The movie was received well, and it won a Golden Globe.

In 2012, he played Satin Struthers, a comedian in Whitney Houston’s last movie before her death, Sparkle alongside Jordin Sparks, TikaSumpter and Carmen Ejogo. This was his first non-comedy movie.

It was announced in 2014 that Mike Epps would play Richard Pryor in his Biopic alongside Oprah Winfrey who would play Pryor’s abusive Grandmother, Marie Carter. The Biopic is to be directed by Lee Daniels.

Right now, he is working on a baseball-themed movie with the newly disbanded boy band, Mindless Behavior. The movie is to be called Bad Behavior. Mike Epps plays their baseball coach, Andre Parker.

Mike has also done a lot of work within the music industry including hosting G Unit’s mixtape in 2008, Elephant in the Sand. His album Funny Bidness: Da Album was released in 2009. He featured in French Montana‘s Mac Wit Da Cheese mixtape also in 2009. Amongst many others, he was also on J Cole’s Born Sinner album.

In 2012, he was the ambassador for the Super Bowl in his hometown, Indiana.

He likewise featured in several TV series like The Sopranos, Being Mary Jane and Uncle Buck.

Mike Epps married his girlfriend Mechelle McCain in 2006, and they live in Beverly Hills, California. They met during the filming of The Fighting Temptations where he played Lucious. Mechelle played his girlfriend. They have four children. The first, Bria Epps is from a previous relationship.

Mike Epps has enjoyed a few nominations for the BET Comedy Award and Black Reel Awards for his role as supporting actors in some of his movies.

He has won three awards;

The Gotham Independent Film Awards for Best Ensemble Performance. He shared this with other members of the cast in Talk To Me in 2007.

He has also received one negative award. He got the Stinkers Bad Movie Award for Less Than Dynamic Duo for a role in The Honeymooners. He shared this award with Cedric the Entertainer.