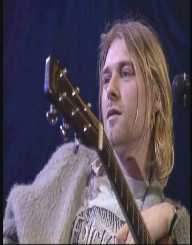 American musician Kurt Cobain was born on the 20 February 1967 at Grays Harbor Community Hospital in Hoquiam, Washington State to Wendy and Donald Cobain. He was raised in the town of Aberdeen where his father worked as a car mechanic, and his mother was a housewife. His family was musical including an uncle who played in a band and a great uncle who was a tenor. Cobain showed artistic ability at a young age and was playing the piano before starting school.

His parents divorced when he was eight years old, and his childhood was unsettled from that time onwards leading him to develop a rebellious streak.

Cobain was a pupil at Robert Gray Kindergarten, Aberdeen Junior High School, and Aberdeen High. He found his school difficult because of bullying and left without graduating.

Cobain started playing guitar in his early teens. He dropped out of high school and became interested in the local band scene. He met Krist Novoselic at Aberdeen High School. They were both interested in forming a band and made a recording with Novoselic on bass guitar and Aaron Burkhart on drums.

In 1987, Nirvana was formed, and they started doing gigs at Evergreen State College in Olympia. The Seattle indie label Sub Pop signed them in 1988, and their first release was Love Buzz and Big Cheese. Their debut album, Bleach was released in 1989 and caught the attention of underground-rock fans. Nirvana released Silver and Dive in 1990. Butch Vig produced six songs with Nirvana including Smells Like Teen Spirit. At the same time, Channing left the band and was replaced by Dave Grohl.

In 1990 Nirvana signed to Geffen Records, Nevermind was released and eventually sold ten million copies in the United States. Smells Like Teen Spirit and Come as You Are as significant hits fuelled Nirvana’s major success. Some commentators said that Cobain felt their success was somehow counter-productive to Nirvana’s anti-establishment point of view. Around this time he used his fame to promote his stance of supporting homosexuals as well as women.

MTV Unplugged in New York was released in 1994, and in 1995 it won the Best Alternative Music Album Grammy Award.

By 1993 Cobain had developed a severe drug problem. In May that year, he overdosed on heroin at home. His relationship with his partner Courtney Love was turbulent and received a lot of publicity. Police and children’s services were involved, and there was an incident where he was charged with domestic abuse. In July Cobain overdosed in a New York hotel just before a Nirvana show. When Nirvana was touring Europe in March 1994, Cobain was found comatose from an overdose of Rohypnol.

Upon his return to the United States, Cobain was admitted to the Exodus Recovery Center in LA but checked himself out the following day. On the 8 April 1994, his body was found. He had taken his life with a self-inflicted gun wound to the head.

Cobain married Courtney Love on the 24 February 1992. They had one child, a daughter Frances Bean Cobain who was born on the 18 August 1992.