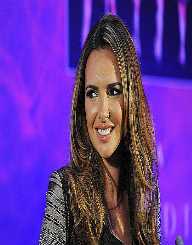 Nadine Coyle started off as a singer and songwriter, she did modeling and was part of the reality television series and documentary for Girls Aloud.

Nadine Coyle parents Lillian and Niall first noted her talent when she was two. Nadine has two sisters, Charmaine and Rachel.

Nadine Coyle Nadine studied in Thornhill College when she first auditioned in Popstars, an Irish talent show. She joined Six in 2001 but was replaced as she was only sixteen.Nadine did not further her studies after high school.

Under the encouragement of Louis Walsh, a manager whom she sent a demo to, Nadine audition for Pop Stars:

The Rivals in 2002. By the end of the year, Nadine Coyle joined Cheryl Tweedy (famously known as Cheryl Cole), Sarah Harding, Nicola Roberts, and Kimberley Walsh as a new girl group Girls Aloud.

Their first single Song of the Underground was released in November 2002. By 2008, the group was named United Kingdom's biggest selling girl group of the century. Nadine reported that Nadine Coyle was blindsided when the team announced that it was taking a break in 2009.

In November 2012, Girls Aloud released Something New to celebrate their tenth anniversary.

The band toured around the United Kingdom until March 2013, where the proceeds of Something New single was donated to Children in Need. After the tour, Girls Aloud announced the end of their band.

When Girls Aloud was popular, Nadine Coyle appeared alongside her bandmates to feature in Girls Aloud documentary and television series. She was briefly a mentor in 2012 America’s Next Top Model.

Girls Aloud were in Guinness World Records for Most Successful Reality TV Group in 2007 and 2011; Most Consecutive Top Ten Entries in the UK by a Female Group in 2008.

For Nadine Coyle first solo appearance in a televised tribute to the late Stephen Gately, Nadine performed with Boyzone Coyle in March 2010.

After a few hiccups with record labels and unreleased duets, Nadine managed to sign a deal with Tesco, setting up her own Black Pen Records imprint.

Tesco was given the right to sell her records exclusively.Nadine Coyle  Her debut solo album was released in November 2010, a single with the same name preceded the Insatiable album.

Nadine Coyle released single Sweetest High in 2011 and collaborated with Shane Filan for a single I Could Be in 2015. Neither single made the charts. Nadine appeared in films Surfing with William and St. Trinians as supporting role.

Nadine Coyle briefly dated actor Jesse Metcalfe; the pair broke up in 2006 after an on-off relationship. In 2008, she was dating ex- NFL star Jason Bell and were engaged to be married.

The couple split in 2011. Nadine was pregnant with his child, and daughter Anaiya Bell was born on 20 April 2014.