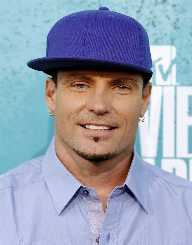 American rapper Vanilla Ice was born Robert Van Winkle on the 31 October 1967 in Miami Florida. He was raised in Florida and also spent part of his upbringing in Texas. An interest in music from a young age led participating in break-dancing, and he was also sporty, taking part in motocross races.

Vanilla Ice was a pupil at the R.L. Turner High School, Carrollton, Texas

A good dancer, he became known around the nightclubs in Dallas, and it was at the City Lights nightclub that he became acquainted with Tommy Quon who offered to become his manager. His first album, Hooked, was released in 1989. The album contained the song Ice Ice Baby which was subsequently heard on radio and lead to a contract with SBK Records.

His first album with the label was To The Extreme was a success. Ice Ice Baby appeared on the single charts, making Vanilla Ice the first non-African American rapper to do so.

The success of his first album with SBK Records and Ice Ice Baby saw Vanilla Ice emerge as a major rap artist. His had another hit with Play that Funky Music and his album To The Extreme sold millions of copies.

Vanilla Ice was criticised for his lyrics and for capitalizing on the African American rappers especially when questions about his past were raised, and it was found that he had exaggerated certain aspects of his upbringing.  In 1991, Vanilla Ice appeared in the film Cool as Ice, but it was not a success. Around this time his career faltered.

Vanilla Ice released Mind Blowin (1994), but it received a negative reception. After the failure of Mind Blowin, he took a break from music, returning with Hard to Swallow (1998), Bipolar (2001), Platinum Underground (2005) and Wisdom, Tenacity, and Focus (2011). Apart from music, he continued with his interest in a sport, mainly motocross and also appeared in Celebrity Boxing where he was lost to Todd Bridges. In 2004, Vanilla Ice participated in the reality show The Surreal Life. In 2013, he was in the television series,

Vanilla Ice Goes Amish. He played Mark Twain in The Ridiculous 6 (2015) and was a contestant in Dancing with the Stars (2016). Reverting to his birth name, Vanilla Ice hosted The Vanilla Ice Project on the DIY Network (2011-2017).

The same year he won the American Music Awards for Favorite Rap/Hip-Hop Artist. In 2011, The Vanilla Ice Project was awarded the Best Home Show by the Factual Entertainment Awards.

During 1992 Vanilla Ice was in a relationship with Madonna for eight months. He married his wife Laura in 1997 and 2016; she filed for divorce. The couple has two daughters.