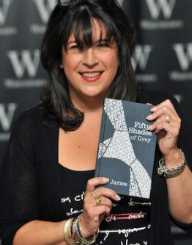 E.L. James is an English author and romance novel writer known for her Fifty Shades of Grey novel.

Erika Leonard James was born of mixed parentage. Her mother was Chilean while her father was Scottish. She was born in Willesden, London in England on the 7th March 1963.

She was raised up in Buckinghamshire. James went to Pipers Corner School. Upon graduating, she joined The Wycombe High School. James graduated from the University of Kent in South East England, with a degree in history.

Soon after graduating James was hired as an assistant manager at the National Film and Television School. She progressed to a managerial level. She then rose to be a production executive at the British Broadcasting Cooperation. James met Niall Leonard a director, and screenwriter while on her carrier at the Film and Television School. The two got married in 1987. They got two sons.

She wanted to be a romance novel writer. Her handicap was the lack of literary knowledge in publishing. James got an idea on how to write after watching The Twilight. This was a film produced in 2008 based on the Vampire novels written by Stephenie Meyer. The novel targeted a young adult audience. James bought the Vampire Series novels. She read and perused them with the eagerness to be a writer.  Within a few days of reading, she decided to write her own novel

Her first novel was a rejoinder to The Twilight series. Her work was principally guided by the fan fiction genre concept. In 2009 James started her writing career. Within a period of six months, she had written two books. The fan fiction phenomenon was a great steering force in her writing. It inspired her to publish her novels. James wrote her novels under the title Snowqueens Icedragon. She was highly rated by the literary critics.

The success ushered her into the writing of the Fifty Shades series. James explains that the Fifty Shades trilogy was greatly attributed to her mid-life crisis. She was able to put all her fantasies on paper. James got much support from her husband who edited the books. She used the feedback she got from her readers to improve on the subsequent publications.

In her publishing career, she has managed to capture the imagination of many readers. She has an analogy of writing which is unique to her. Her novels have a captivating transition from one chapter to the next. This makes it harder for the reader to stop reading. The reader also has an easy task in identifying with the characters in the novels.

From 2009 to 2011, James wrote other novels. She started with Master of the Universe. This was followed by its second version Master of The Universe II. Like the other series, this release attracted a huge following.

James managed to top the Forbes list in August 2013, listed among the highest-earning authors. Fifty Shades of Gray gave her returns of GBP 100 million. Fifty Shades of Darker as Told By Christian was released in the stores in the year November 2017. The novels sold over 125 million copies globally, with over 35 million copies being sold in the United States. Some of her novels have been adapted into the film industry.

Through her influence, she managed to get the support of other celebrities like Tom Hiddleston, Benedict Cumberbatch, and Rachel. Together they launched the signing of a card through a charity campaign led by a British company. The cards were auctioned electronically on eBay in May 2014. The proceeds of the campaign went to support charitable activities in the UK.

She is a recipient of several recognition awards for her writing skills. In 2012, she was feted with four awards. These were the Publishing Person of The year, The 100 Most Influential People in the World, Book of the Year, Fifty Shades of Grey, and Popular Fiction Book of the Year.

Her life took a brighter turn in 2012. The success of the Fifty Shades Trilogy made her dreams of becoming the most renowned writer in the adult proactive romance a reality. She rose from a humble beginning of an assistant manager to the position of the most coveted writer. Her readers eagerly look forward to her new novels.