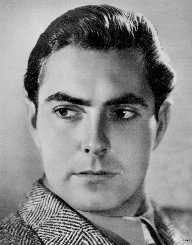 Tyrone Edmund Power III was an American radio, film, and stage actor. Born on May 5, 1914, he mostly played both romantic and adventurous roles. Coming from a family with acting background, coupled with his striking look, Power started his acting career in the 1930s and is best known for films like The Mark of Zorro, Blood and Sand, Witness of the Prosecution and, Nightmare Alley Captain from Castle among several others.

Tyrone Power was born on May 5, 1914, in Cincinnati, Ohio to Helen Emma "Patia" (née Reaume) and Tyrone Power Sr. Tyrone was from a family with acting background. His father was a screen actor; his great-grandfather was Irish actor and comedian. Tyrone Power and his paternal grandmother was a stage actress, Ethel Lavenu. He received early education in Cincinnati-area Catholic schools and later graduated from Purcell High School in 1931. After graduating from school, Power decided to follow in his father’s career and therefore joined him to learn the profession. His father died of heart attack in December 1931.

Despite the death of his father, who was his model and inspirer, Tyrone Power continued to pursue his acting career. After several searches for acting roles, he gained a minor role in the film Tom Brown of Culver, 1932, starring Tom Brown. No other part followed and felt disappointed; he moved to New York to pursue a stage career upon the advice of his friend Arthur Caesar. While there he earned roles in Broadway plays including Romeo and Juliet, Flowers of the Forest and Saint Joan.

In 1936, Tyrone Power moved to Hollywood, and that was the beginning of his success in the film industry. Impressed with his striking looks, director Henry King offered him a lead role in Lloyd’s of London, a role that brought him to the limelight. The performance and success of the film earned him several other characters. He appeared in several romantic comedies, drama, musicals, war films and adventurous movies.

Tyrone Power's works include Day-Time Wife, Blood and Sand, Son of Fury: The Story of Benjamin Blake, Alexander’s Ragtime Band, and Rose of Washington Square. Others include Jesses James, A Yank in the R.A.F, The Mark of Zorro, and The Black Swan among several others. In 1939, he was second to Mickey Rooney as the biggest box office draw. The Mark of Zorro became one of his successful role in the 1940s and brought about several other adventurous roles later in his career.

In 1942, Tyrone Power was drafted to the United States Marine Corps for military service, and that interrupted his acting career. He received training at Marine Corps Depot San Diego and later at the Officer’s Candidate School at Marine Corps Base Quantico. On June 2, 1943, he was commissioned a Second Lieutenant. He was promoted to First Lieutenant after completing a training program at Naval Air Station Corpus Christi in Texas. His service in the Pacific War earned him the American Campaign Medal. He was discharged from active duty in January 1946 and on May 8, 1951, was promoted to Captain in reverse and the rank of major in 1957.

After returning from military service, Tyrone Power starred in The Razor’s Edge co-starring Ann Baxter and Gene Tierney. He played romantic roles during this period including in films like Captain from Castile, That Wonderful Urge, Prince of Foxes, and The Black Rose. Despite receiving several film roles, Power also took time to play roles in theatre productions on Broadway and national tours. Power’s also played roles in films like Seven Waves Away, Rising of the Moon, and Witness for the Prosecution. His final works include a role on stage in the play Back to Methuselah.

On April 23, 1939, Tyrone Power married actress Annabella, (born Suzanne Georgette Charpentier). Annabella came into the marriage with a daughter, Anne, whom Power adopted. Their marriage fell apart because Annabella could not give Power a son, which he wanted badly to carry on his acting legacy. They divorced in 1949 after separating in 1946. After separating he dated Lana Turner for some years. He then married Linda Christian, 1949, with who he had daughter Romina Francesca Power, after three times miscarriages. Their second daughter Taryn Stephanie Power landed in 1953. They ended the marriage in 1955.

Tyrone Power dated Mai Zetterling and British actress Thelma Ruby after the divorce. His third marriage was to Deborah Ann Minnardos on May 7, 1958. The had a son Tyrone Power Jr. Power died on November 15, 1958, aged 44 of fulminant angina pectoris in a hospital in Madrid. Power was at the time shooting the film Solomon and Sheba when he suffered a massive heart attack. He was buried at Hollywood Forever Cemetery, with full military honours. His second son, Tyrone Power IV, was born two weeks after his death.