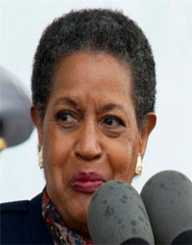 Myrlie Louise Evers–Williams is an outspoken American activist, author, and journalist. She was born on March 17, 1933, in Vicksburg, Mississippi, U.S. She was married to Medgar Evers, a civil rights activist who was murdered in 1963. While Myrlie worked tirelessly to find justice for the murder of her husband, she also perpetuated the work he began.

She has written a number of books advocating for civil rights and also penned down the life and legacy of her husband. She also worked as chairperson for the NAACP for three years. She has been on the forefront even in official gatherings including the second inauguration ceremony of Barack Obama where she delivered the invocation speech. She is currently eighty five years old and a celebrated civil rights activist to date.

She attended Magnolia School where she learnt to play the piano and recite poems. She was also a good singer who performed in school and church as well. In 1950, she graduated from Magnolia High School and joined Alcorn A&M College to study Education.

At Alcorn College, Myrlie Evers–Williams met Medgar Evers who served in the World War II and fell in love with him. Medgar was eight years older than her, and the two were married in December 1951 and had three children. The couple relocated to Mound Bayou where Myrlie found a job at the Mongolia Mutual Life Insurance Company as a secretary.

In 1954, Medgar was appointed the Mississippi field secretary for the NAACP while Myrlie became its secretary. The two worked hand in hand advocating for an end to racism in schools and public facilities. They also advocated for the African-American people voting rights since they were denied the right to vote.

For more than ten years, they campaigned for the rights of the African-American people to enjoy equal access to public facilities, schools, and universities in Mississippi. Medgar and his wife were now a threat in the south especially the white supremacists who did not want a change in race related matters. On June 12, 1963, Medgar was shot dead by Byron De La Beckwith near his home.

Fight for Justice and later Career

Beckwith was arrested and brought before two white juries twice but was not convicted based on race. Myrlie Evers–Williams fought for justice which did not prevail until 30 years later in the 1990s when Beckwith was sentenced under a multi-racial court of justice. In 1967, Myrlie together with her children relocated to Claremont, California. She enrolled at Pomona College and attained a Bachelor of Arts degree in Sociology. At this point, she had gained recognition as an outspoken civil rights activist and was a spokesperson for the NAACP.

She also authored the book ‘For Us, the Living’ which outlined the legacy of her deceased husband. She became the director of planning at the Centre for Education for the Claremont Colleges in 1968. She became the Vice President at Seligman and Lapz from 1973 to 1975 responsible for advertising and publicity. She was also the national director for community affairs at Atlantic Richfield Company (ARCO) in Los Angeles in 1975.

In 1987, Myrlie Evers–Williams was appointed as a commissioner at the Board of Public Works by Los Angeles Mayer Tom Bradley. She also ran for the position of chairperson at the NAACP in the 1990s after becoming a member and won in 1995. In her tenure, she improved the financial status of the organization and restored its image which was marred by multiple scandals and debts. However, she did not vie for the position again in 1998.

In 1998, Myrlie Evers–Williams was awarded the NAACP’s Spingarn Medal and was also named woman of the year by the Ms. Magazine. She founded the Medgar Evers Institute in Mississippi and also published books like ‘Watch Me Fly: What I Learned on the way to Becoming the Woman I was Meant to Be’ (1999). She also contributed in the publishing of her husband’s autobiography titled ‘The Autobiography of Medgar Evers: A Hero’s Life and Legacy Revealed Through His Writings, Letters and Speeches’ (2005).

She was awarded the National Freedom Award by National Civil Rights Museum in Memphis in 2009. She was also privileged to give an opening speech at the second inauguration of President Barack Obama on January 21, 2013. This made her the first woman to have ever made opening remarks at a Presidential Inauguration. The Medgar and Myrlie Evers house became a National Historic Landmark in 2017.

After the death of her first husband Medgar Evers in 1963, Myrlie Evers–Williams was again married to Walter Williams in 1976. Williams was also a civil and union rights activist who admired the zeal of Myrlie in advocating for what was right. The two lived in Bend, Oregon until William died in 1995 of prostate cancer. She is currently eighty five years old.