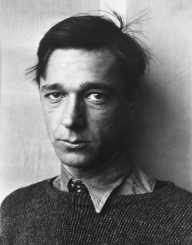 American photographer and photojournalist Walker Evans III was born in St Louis, Missouri in 1903 to Walker Evans Jr. and Jessie Beach Crane. His father worked in advertising, and the family traced their ancestry back to 17th century England. He was an artistic child who enjoyed painting. As a child, he was given a small Kodak camera, and he used to take pictures of his friends and family. He was also interested in postcards and built up a collection.

Because his father’s work meant that the family moved around frequently, he attended various schools. After his parents divorced, Evans lived in New York City with his mother and attended Phillips Andover in Massachusetts, a prep school for boys from wealthy families. He then rolled at Williams College, Williamstown (1922).

After leaving college, Evans relocated to New York City where he worked in various bookstores. At that stage he was interested in becoming a writer and was a fan of James Joyce, D.H. Lawrence, T. S. Elliot and e.e. Cummings as well as the European writers Charles Baudelaire and Gustave Flaubert. Evans spent a year in France in 1927. He returned to New York still intent on being a writer but at the same time becoming interested in photography as a means of artistic expression. Initially, his photographic work reflected European modernism, but before long he developed his own style focusing on ordinary subjects.

During the mid-1930s, the years of the Great Depression, Evans worked for the government in a resettlement community in West Virginia. He was then worked in the Resettlement Administration agency for the US Department of Agriculture. He carefully documented small-town life, showing how the government was working with rural communities via the New Deal initiative. He photographs of rural life, architecture, churches, and graveyards impacted on the general public and today are viewed as a significant visual history of that period of U.S. social history.

Evans worked with the writer James Agee to produce Let Us Now Praise Famous Men (1941). They went to Greensboro, Alabama and documented three families and their experiences during the Great Depression. During the late 1930s to the early 1940s, Evans built up a collection of portraits taken on New York City subway which were only published in 1966. He worked for Time magazine, Fortune magazine (1934-1965) as well as luxe magazine (1945-1965) as a photojournalist.

Between 1973-1975 Evans was presented with a Polaroid SX-70 and his final photographs were his experimentation with an instant form of photography.

In 1975, Evans had a stroke and died at his home in New Haven, Connecticut. He is represented in the St Louis Walk of Fame.