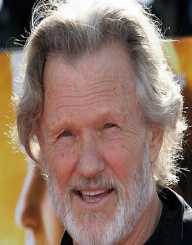 Kristoffer Kris Kristofferson was born on June 22, 1936, in Brownsville, Texas. His father Lars Henry was a U.S. Army Air Corps officer and later became a U.S. Air Force Major General. When he became 17 years old, Kristofferson worked a summer as a dredging contractor. As a child, he and his family had to move a lot, but the family finally settled down in San Mateo, California. He finished the San Mateo High School and began writing. In 1954, he enrolled at Pomona College. While at college, Kristofferson played rugby union, football and track, and field. For his achievements, he was featured in Sports Illustrated issue Faces in the Crowd.

Together with his classmates, Kristofferson revived the Claremont Colleges Rugby Club in 1958. He graduated college in 1958 with Bachelor of Arts degree in literature. He won the Rhodes Scholarship to attend Oxford University. There he studied at Merton College and was awarded Blue for boxing, as well as continued playing Oxford. It was during his time in Oxford when Kristofferson began writing songs. Together with the help of Larry Parnes, Kristofferson recorded for Top Rank Records.

After graduation, pressured by his family, Kristofferson joined the U.S. Army and attained Captain rank. He received his first training at Fort Rucker, Alabama and became a helicopter pilot. During the early 1960s, he was stationed in West Germany in the 8th Infantry Division. During his time in the army, Kristofferson formed a band and continued writing music.

His tour of duty ended in 1965, and Kristofferson was assigned to teach English at West Point. However, he decided to leave the army to pursue songwriting. Because of this decision, his family disowned him. After leaving the army, he traveled to Nashville and worked in several different jobs to support himself.

One of Kristofferson’s initial jobs was swiping floors in Columbia Recording Studios in Nashville. Kristofferson asked a friend to give one of his tapes to Johnny Cash but initially did not gain any attention. Kristofferson landed a helicopter in Cash’s front yard at one point, gaining his full attention. Cash decided to record Sunday Mornin’ Comin’ Down, which gained Kristofferson songwriter of the year award at the Country Music Awards. At the time he was also working as a commercial helicopter pilot for a Louisiana firm Petroleum Helicopters International.

In 1966, Kristofferson’s single “Viet Nam Blues” by Dave Dudley was released, and the following year, he signed with Epic Records. His first song with the brand “Golden Idol/Killing Time” was not successful, but during the next couple of years, he released several chart hits. In 1970, Kristofferson signed to Monument Records as a recording artist and released his first album, Kristofferson. At first, the album sales were poor, but the following year the album was re-released under the title Me & Bobby McGee. One of his singles “For the Good Times” won the 1970 Academy of Country Music Song of the Year Award.

In 1971, Kristofferson had several numbers one hit for other artists, including Janis Joplin, who he was a the time dating, Ray Price, Joe Simon, Bobby Bare and Jerry Lee Lewis. His second album was released the same year, titled The Silver Tongued Devil and I. The album was a major success. After gaining recognition as a songwriter and recorder, Kristofferson made his acting debut in The Last Movie and also appeared in Isle of Wight Festival. His performance at the festival was featured in a three-disc compilation The First Great Rock Festivals of the Seventies.

Later that year, Kristofferson released his third album Border Lord and won several Grammy Awards for his songs.
After his musical success, Kristofferson began focusing on acting. He appeared in the film Blume in Love and Pat Garrett and Billy the Kid. He also acted in Alice Doesn’t Live Here Anymore and Vigilante Force. For his performance in A Star Is Born with Barbra Streisand, Kristofferson received Golden Globe Award for Best Actor. In 1986, he starred in The Last Days of Frank Sinatra and Jesse James together with Johnny Cash. Kristofferson’s latest roles have been in Blade II and Blade: Trinity, as well as The Motel Life and Angels, Sing in 2013.

After his 1970s singing success, Kristofferson met Rita Coolidge and married her in 1973. The two released album Full Moon, which was a major success and got several Grammy nominations. His next album, Spooky Lady’s Sideshow was a commercial failure. Since then, his records were not doing so good, since his rough voice did not appeal to audiences, but his songs performed by other artists were most famous.

In 1982, Kristofferson collaborated with Willie Nelson, Dolly Parton and Brenda Lee on a double album The Winning Hand. The album was a success and marked first of many collaborations between Kristofferson and Nelson. The two were joined by Johnny Cash on the group The Highwaymen, and their first album with the same name was a major success. It became the 1985’s record of the year. In 1990, Highwayman 2 was released and was also a success. The same year, Kristofferson was inducted into the Songwriters Hall of Fame.

In 2008, Kris  Kristofferson performed together with Patty Griffin and Randy Owen for a PBS songwriters series. The following year, he released a new album Closer to the Bone under the New West label. The same year, he was honored as a BMI Icon at the 57th annual BMI Country Awards. In fact, throughout his career, his songs earned 48 BMI Country and Pop Awards.

In 2010, Kristofferson released several demos from his time as a janitor at Columbia records, Please Don’t Tell Me How the Story Ends: The Publishing Demos. The demos included recordings that were later featured on his album Me and Bobby McGee. In 2013, he released a new album Feeling Mortal and a live album An Evening With Kris Kristofferson. In 2015, his album The Cedar Creek Sessions was released, and the following year, the album was nominated for a Grammy Award.