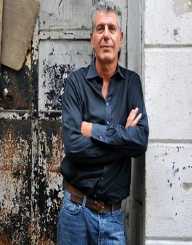 American chef and author Anthony Michael Bourdain was born on June 25, 1956, in New York City. He grew up in Leonia, New Jersey. His father was a classical music industry executive and his mother- a staff editor for The New York Times.

Bourdain developed his love for food at a young age. One of the most memorable moments was on a family vacation in France when Bourdain tried his first oyster. He went to Dwight-Englewood School and graduated in 1973. He also attended Vassar College but dropped out after two years. He was at the time working in several seafood restaurants in Massachusetts, which led to his decision to pursue a cooking career. He went to Culinary Institute of America, which he graduated in 1978.

After graduating from Culinary Institute of America, Bourdain was working in various restaurant kitchens in New York, as well as running them. He ran the Supper Club kitchen, One-Fifth Avenue, and Sullivan’s restaurant kitchen. In 1998, Bourdain became the executive chef at Manhattan restaurant Brasserie Las Halles.

In 2001, Bourdain wrote the New York Times bestselling book A Cook’s Tour. The book was about his travels around the world and experiencing different foods. The book was written together with his TV show of the same title. He has since written several books, like Anthony Bourdain’s Les Halles Cookbook and the culinary mysteries Bone in the Throat. His article’s and essays have appeared in various journals and newspapers, including The New York Times, Maxim, Gourmet, and Esquire.

One of the first Bourdain’s books, Kitchen Confidential was so well acclaimed that the Food Network offered him his world-travel food show. A Cook’s Tour aired in January 2002 and ran for 35 episodes. Since the show was also majorly popular, Fox aired a sitcom named Kitchen Confidential, where the lead character Jack Bourdain was loosely based on Bourdain’s persona.

His next TV project was similar series for the Travel Chanel- Anthony Bourdain: No Reservations. During the filming of the show in 2006, the Israel-Lebanon conflict broke out, and the crew didn’t get to film what they have planned, instead of filming the live-footage of events. The episode later was nominated for an Emmy award. Bourdain left the Travel Chanel in 2012. He went on to host CNN show Anthony Bourdain: Parts Unknown. The show is focused on different cousins and cultures, and even featured former U.S. president Barack Obama.

Besides his shows, Bourdain has made several appearances on other TV projects. He has been the guest judge on Bravo’s Top Chef in several episodes. He was also a guest in the Bizzare Foods with Andrew Zimmern. He was also the judge and mentor on ABC’s competition show The Taste. Bourdain made his first film appearance in the 2015 film The Big Short.

Bourdain is known for his willingness to try different, exotic foods, including sheep testicles, ant eggs, and seal eyeballs. He has stated that the most disgusting thing he has ever eaten is a Chicken McNugget.

Bourdain is also a drinker and smoker. The chef Thomas Keller once served Bourdain a 20-course meal, which also included a mid-meal coffee custard infused with tobacco. He quit smoking in 2007 after his daughter was born.

Bourdain also used to use cocaine, LSD, and heroin. The famous chef never hides his positive attitude towards several chefs and his dislike for celebrity chefs and the lack of authenticity to their cooking.

In 1985, Bourdain married his high-school sweetheart Nancy Putkoski. The couple remained together for 20 years but ended up divorcing in 2005.

In 2007 he married Ottavia Busia, with whom he has a daughter Ariane. Busia is a jiu-jitsu expert, and she has appeared on several of her husbands No Reservations episodes. The couple divorced in 2016. He noted that being away from his family for the most of the time became a strain on the relationship. The divorce was a agreement with no public scandals.

In 2015, Bourdain received a blue belt in Brazilian jiujitsu. He has won the IBJJF New York Spring International Open Championship in 2016.