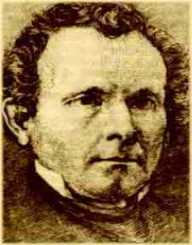 Sylvester Graham was a former American clergyman who became a key figure of the 19th-century dietary reform movement in the US. The making of Graham Crackers, currently found in supermarkets is attributed to him.

Sylvester Graham was born on July 5, 1794, in West Suffield, Connecticut. Two years after his birth, his father died aged 72 years. Consequently, his mother suffered from emotional and mental trauma.

Graham grew up in different households with various relatives playing key roles in his upbringing. He suffered from persistent illnesses in his teenage years which kept him away from schooling for many days.

Sylvester Graham joined Amherst Academy in his late twenties to follow in the footsteps of his father and grandfather who had become ministers. However, his dream met a stumbling block when he was forced to quit school after his schoolmates created a scandal against him.

They alleged that he had improperly approached a woman. His gift for oratory was recognized at the institution despite getting the expulsion.

Sylvester Graham's expulsion from school significantly damaged his morale to the extent that he moved to Rhode in an attempt to get over it. He studied theology privately while at Rhode and began working as an itinerary preacher in 1828 in New Jersey. He had earlier on tried different vocations including farm-hand and teaching before preparing for the ministry.

In 1830, he received an opportunity to work for the Pennsylvania Temperance Society. In this capacity, he started studying human physiology, regimen, and diet before embarking on a lecture career that took him up and down the Atlantic Coast.

Sylvester Graham met two great proponents of vegetarianism in William Metcalfe and William .A. Alcott while working at the company.

Graham swiftly adopted Metcalfe’s ideas and later reported that his health started improving with such practices. He advocated for the inclusion of fresh fruits and vegetables in the diet and the elimination of condiments, meat, coffee, and tea.

His work with bread was specifically pronounced and he advocated for homemade bread with whole, coarsely grounded wheat as the key ingredient.

Besides, Sylvester Graham came up with several other recommendations for the well-being of the people. These included loose and light clothing, open bedroom windows, pure drinking water, hard mattresses, and cold shower baths.

Graham’s fame further exploded in 1832 when the individuals who had followed his advice appeared to thrive during the cholera outbreak.

Consequently, his lectures in Boston and New York became crowded that year. However, his Boston lecture was a target of riots by a section of commercial bakers and butchers.

In his book, he urged that bread should be homemade and advocated for the use of coarser, whole wheat flour. A Boston Grahamite published “The Graham Journal of Health and Longevity” in that same year, and he also co-founded the American Physiological Society.

After studying physiology, Sylvester Graham concluded that meat, just like alcohol, corrupted both the individual’s body and soul and harmed families and societies alike. He too viewed sex with suspicion, like his colleagues of the temperance movement.

They regarded sexual stimulation as an activity that promoted lust hence leading to harmful behaviors in society.

Sylvester Graham further argued that it was essential for an individual to avoid foods outside their plan to encourage a decreased libido, the ideal state for a balanced body.  Graham’s beliefs were greatly influenced by the Bible and Christian theology, and he believed that people should eat plants alone, like the biblical Adam and Eve.

Sylvester Graham can be regarded as one of the first people to realize that stress causes diseases because he often advised people to stay calm and avoid worries of life. It is from these views that he came up with theology and diet, aimed at keeping families, individuals and society pure and healthy. Graham’sincreasing fame saw the uprising of “Grahamism” movement. Individuals who followed his ideas were referred to as “Grahamites.”

Inspired by his ideas, these people began developing and marketing graham bread, graham flour, and graham crackers. He or one of his followers is credited with the creation of the Graham Cracker, a now ubiquitous snack found in supermarkets.

Sylvester Graham boarding houses were created to cater to his recommendations. In 1850, he teamed up with three other individuals in William Metcalfe, William Alcott, and Russell Trail and founded the American Vegetarian Society in New York City.

The organization was set up similarly to its correspondent, established in Great Britain in 1847. Graham’s two best-known publications were “Lectures on the Science of Human Life (Boston 1839)” and “Lectures to Young Men on Chastity.” The former had several of its editions printed in the US with widespread sales in England.

Some of Sylvester Graham's teachings elicited mixed reactions from the people. He was criticized by some via media and was subject to a riot attack by butchers and bakers for his unwavering stance on anti-commercial bread. Besides, he was viewed as a source of outrage in Maine for being vocal on sexual activity.

Sylvester Graham married Sara Earl in 1826. He was in Rhode at this time having been expelled from school. It is this woman who nursed him back to health following the horrible experience at school.

Sylvester Graham was often overworked despite being a preacher of moderation and by 1839, had retired from lecturing. He was working as a poet while at the same time struggling with physical and mental health issues.

Over the entire period of his lecturing, some of his tenets were adopted into various parts of the US food system. John Harvey and W.K Kellogg specifically made use of Graham’s grains into their breakfast cereal products.

Sylvester Graham died on September 11, 1851, in Northampton, Massachusetts. He was 57 years old at the time of his death.

He might have died a long time ago, but Graham’s legacy remains, and the Graham Cracker currently found in local supermarkets is enough evidence pointing at his life, devoted to the care of the human race.