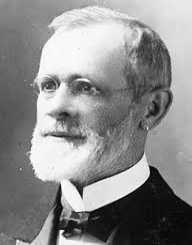 Cleveland Abbe was an American meteorologist and astronomer.

Cleveland Abbe was born on December 3, 1838, in New York City. His father, George Waldo Abbe, was a wealthy merchant. His mother’s name was Charlotte Colgate Abbe. He had a younger brother, Robert, who went on to become a prominent radiologist and surgeon.

Cleveland Abbe first studied at the David B. Scott Grammar School. He received a Bachelor of Arts and a Master of Arts from the Free Academy at City College. He then earned a Bachelor of Science from Harvard University.

In 1859, Cleveland Abbe worked as an assistant professor of engineering at the University of Michigan. During the Civil War, he was an assistant at the Longitude Department of the U. S. Coast Survey. In 1866, he went to Russia for a visit to the Pulkovo Astronomical Observatory. He then returned to the U. S. and briefly worked at the Naval Observatory. In 1868, he became the head of the Cincinnati Observatory. In 1869, he started writing weather reports for the Cincinnati Chamber of Commerce.

In 1871, Cleveland Abbe became the head meteorologist at the U. S. Weather Bureau. He wrote weather forecasts and sending them to various political and scientific institutions. In 1872, he began publishing the Monthly Weather Review under the U. S. Army Signal Corps. He started training other scientists to predict the weather. He advocated for the establishment of four standard time zones in the U. S.

He developed new instruments and devices to be used in meteorology. He worked with scientists such as Oliver Wolcott Gibbs, Arthur Wright, and Heinrich Wild. In 1888, he became one of the co-founders of the National Geographic Society. From 1886 to 1905, he was a professor at George Washington University. From 1896 to 1914, he gave occasional lectures at Johns Hopkins. In 1909, he became the editor of the weather bulletin published by the Mount Weather Observatory.

The National Academy of Science gave Cleveland Abbe the Public Welfare Medal and the Marcellus Hartley Medal. He also received the Symons Gold Medal from the Royal Meteorological Society. In 1884, he was elected as a Fellow to the American Academy of Arts and Sciences.

From 1870 to 1908, Cleveland Abbe was married to Frances Martha Neal. Their elder son, Cleveland Jr, became a geographer. Their younger son, Truman, became a surgeon. After Frances’ death, he married Margaret Augusta Percival.

Cleveland Abbe passed away in Chevy Chase, Maryland, on October 28, 1916. He was 77 years old. He was buried in Washington, D. C. at the Rock Creek Cemetery.