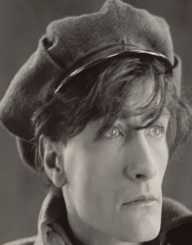 Antoine Marie Joseph Artaud, commonly known as Antonin Artaud was a French dramatist, poet, essayist, actor and a most important personality in the 20th century drama and in experimenting new idea.

Antonin Artaud was born on 4th September 1896 to the couple Euphrasie Nalpasd and Antonin-Roi Artaud. His parents were from Smyrna (modern Izmir). He had Greek lineage. Antonine-Roi owned a ship. He was born in Marseille, France.

Antonin had three siblings, and he suffered from meningitis at the age of four. The disease had no cure on those days. He fought with the disease and survived but as a week boy.

Antonin Artaud stayed in a sanatorium for five years which was expensive. He was drafted into the French Army. In view, if his obsession with narcotics and mental unsteadiness he was not continued in the Army.

He read the works of Arthur Rimbaud, Charles Baudelaire, and Edgar Allan Poe during his stay in the sanatorium. He got addicted to laudanum since that was recommended by the Director. Antonine suffered a nervous breakdown at the age of 19.

He studied at the College du Sacre-Coeur.

Antonin Artaud relocated to Paris to take up writing as a profession. This was against his father’s wishes. Antonine learnt that he had a liking towards drama and fond of introducing new and unusual ideas. He took the guidance of directors like Charles Dullin and George Pitoeff. He wrote poems and essays. His earlier works were not accepted by the publisher of La Nouvelle Revue Francaise but its editor, Jacques Riviere had a rapport with Antonine. The literary work in the form of letters was first published in Correspondence avec Jacques Riviere. This was his main publication.

He developed a keen desire in films by writing the new and experimental ideas for the cinema, The Seashell and the Clergyman in 1928. This film was guided by Germaine Dulac. He featured in two films during 1927 and 1928.

During 1926-28, Antonin Artaud created a Theatre, Alfred Jarry with Roger Vitrac. They wanted to release, Jet de sang, but it did not materialize as the theatre was closed within a short period. Artists like Andre Gide, Arthur Adamov and Paul Valery visited the Theatre during its short duration.

He, in 1931, published First Manifesto for a Theatre of Cruelty in La NouvelleRevue Francaise. In 1935, The first work, The Cenci by Artaud was a failure though he had used state-of-the-art in the theatre.

He returned to France in 1937 and travelled to Ireland. He was deported from Ireland. His health deteriorated and most of the time spent in asylums. He was asked to take treatment from Dr.Gaston Ferdiere to overcome the illusions and fits. From here, he was sent to a psychiatric clinic at Ivry-sur-Seine.

Antonin Artaud’s most important works are Theatre of Cruelty and The Theatre and Its Double.

He has written for 8 films, 7 bibliographies and 20 in English, 16 in French and 1 in German. Artaud on the advice of his friends, started writing again.

Antonin Artaud was detected to have suffered colorectal cancer in 1948. Artaud died on 4th March 1948.