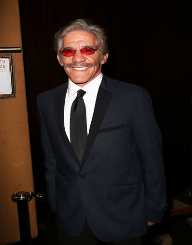 Geraldo Rivera was born on July 4, 1943, in New York City, New York. His mother was a restaurant worker, and his father, a taxi driver. Riviera grew up in West Babylon and Brooklyn. He attended the West Babylon High School. After finishing high school, he went on to study at the State University of New York Maritime College. There, he was a member of the rowing team. Rivera graduated from college in 1963, and went on to study at the University of Arizona. He graduated with a Bachelor of Science degree in business administration in 1965.

Rivera worked several jobs to support himself, like working as a clothing salesman and cook. In 1966, he enrolled at Brooklyn Law School. During this time, he was an intern with New York County District Attorney. He received his J.D. in 1969. He continued his education on the Reginald Heber Smith Fellowship in poverty law at the University of Pennsylvania Law School. In 1969, he was admitted to the New York State Bar.

After finishing his academic studies, Geraldo Rivera began working with Manhattan’s Community Action for Legal Services and the National Lawyers Guild. He became the attorney for Puerto Rican activist group Young Lords. His work with the group attracted media attention, specifically the WABC-TV news director Al Primo. He offered Riviera, a job as a reporter. Rivera took the job, but before he could start working, he had to take lessons in broadcast journalism at the Ford Foundation’s Summer Program in Journalism.

In 1970, Rivera was officially hired by WABC-TV and began working as a reporter for Eyewitness News. Two years later, he won the Peabody Award for his report on neglect and abuse of patients with intellectual disabilities at Willowbrook State School in Staten Island. After gaining widespread attention, Rivera began appearing in several national programs, such as 20/20 and Nightline. During this time, he also began hosting ABC’s Good Night America.

In 1983, Geraldo Rivera interviewed Ken Ramsauer, a lighting designer from New York who had AIDS. With his broadcast, Rivera became the first U.S. reporter to mention AIDS. Another controversy happened in 1985 when Rivera publicly criticized Roone Arledge for lack of integrity. Arledge refused to air a report on the relationship between Marilyn Monroe and John and Robert Kennedy. Arledge had a close relationship with the Kennedy family, and Rivera believed that it was the reason for not airing the story. After this, Rivera was fired from his job, but the official reason given by ABC was that he had violated the network’s policy by donating $200 to a non-partisan mayoral race candidate.

In 1986, Rivera hosted a broadcast; he later described as one of the highest profile programs in his career. The broadcast was about The Mystery of Al Capone’s Vaults under the Lexington Hotel in Chicago. Millions of viewers watched the two-hour show, but unfortunately, nothing was found in the vault.

In 1987, Geraldo Rivera became the producer and host of the talk show Geraldo. The show ran for 11 years and featured controversial guests and a theatrical performance. The show was characterized as “Trash TV” by Newsweek and a couple of United States senators. In 1994, Rivera began hosting the show Rivera Live on CNBC evening news.
In 2001, after the September 11 attacks, Rivera accepted a position at Fox News Channel as a war correspondent. His brother accompanied him as a cameraman on his assignments in Afghanistan. In 2003, Rivera was traveling with the 101st Airborne Division in Iraq on a Fox News broadcast. He began to disclose information about the upcoming operation, giving out important information. The military issued a denunciation of his actions, and he was expelled from Iraq.

In 2005, The New York Times accused Rivera of pushing aside a member of a rescue team to be filmed assisting a woman in a wheelchair in the aftermath of Hurricane Katrina. Rivera engaged in a feud with the magazine and demanded a retraction from the Times. In 2007, he was involved in a feud with Michelle Malkin, who announced that she would not return to The O’Reilly Factor since Fox News mishandled a dispute over statements Rivera made about her in an interview. Rivera said that she is a vile and hateful commentator but later apologized for his comments.

In 2012, Rivera made several comments about Trayvon Martin’s hoodie and how it was connected to Martin’s shooting death. He continued to make these comments even in 2014 but later apologized.

In 2015, Geraldo Rivera took part in the 14th season of The Celebrity Apprentice and placed second. However, he raised the biggest amount of money in the season for his charity, with $726,000. He continues to appear on Fox News and hosts the program Geraldo at Large. Rivera also hosts a radio talks show Geraldo Show on WABC 770 AM.
In 2015, Rivera announced on the news that his daughter was at the Stade de France when the terrorist attacks occurred, and fortunately, she was not injured. In 2016, he competed in the 22 season of Dancing with the Stars.

Geraldo Rivera has been married for five times. His first wife was Linda Coblentz, who he married in 1965, but the couple divorced in 1969. His second marriage was to Edith Vonnegut, which lasted from 1971 to 1975. The following year, he married Sherryl Raymond, with whom he had a son Gabriel. The couple divorced in 1984. In 1987, he married Cynthia Cruickshank with whom he had two daughters, Isabella and Simone. His fourth marriage ended in divorce in 2000. Since 2003, he has been married to Erica Michelle Levy. Rivera and Levy had a daughter Sol Liliana.

Besides his many marriages, Rivera has also admitted to having a long-term affair with Marian Javits, the wife of New York Senator Jacob K. Javits.