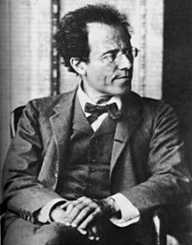 Gustav Mahler was born on the 7 July 1860 in Kaliste, Bohemia which was part of the Austrian Empire at the time and which is now part of the Czech Republic. Mahler's father was a tavern keeper and distiller in Kaliste, but when he was an infant, the family moved to Jihlava where Mahler was raised. Mahler home life was slightly unstable with a self-made father who had married above his social standing and later resented his wife. Mahler did not have a strong relationship with his father, and it has been suggested that he had a mother fixation. He came from a large family with thirteen brothers and sisters.

He was very young when his musical talent started to show itself, and he became interested in the local folk music as well as military bands. Soon he was composing music on the piano and accordion. He made his debut as a pianist at the age of ten, and at fifteen years of age, he was enrolled as a pupil at the Vienna Conservatory. By the time he graduated he had won many compositions as well as piano prizes.

Gustav Mahler's first position was conducting in Bad Hall, an Austrian theatre. He later worked in Prague, Budapest, and Hamburg. At age 37 he was appointed as the musical director of the Vienna Court Opera. He was known as a hard taskmaster and musicians under his control sometimes resented him and disliked his attitude. He resigned from the Vienna Court Opera in 1907. After his resignation, he took up a position as director of the New York City Metropolitan Opera. The tenure was short because he was showing signs of heart disease and he returned home in 1911.

Mahler is famous for his avant-garde, sweeping and highly charged emotional compositions. He composed ten symphonies and various songs, many of which reflected the military bands and folk songs he had been exposed to as a child. His work forms part of the Romanticism movement.

He music was ignored for fifty years after his death but today is regarded as one of the avant-garde 20th-century composers who influenced others and had a huge impact on the composition of classical music in the 20th century.

In 1902 he married Alma Maria Schindler who was also a composer and musician. He was nineteen years older than Alma. She was a beautiful, accomplished, socially active young woman, while Mahler was more a solitary person. Her family opposed the marriage but later consented. Mahler insisted that Maria give up her musical composition and she later resented it.  The couple had two daughters, Anna and Maria. Maria died of diphtheria at the age of four, and this put a strain on the marriage. Around the same time, Mahler was made aware that he had fatal, genetic heart condition.  Alam turned to alcoholism and had to receive treatment.  After eight years of marriage, Alma met a young architect, Walter Gropius and had an affair. Gropius would go on to become famous through the Bauhaus movement in architecture. The affair was discovered when Gropius addressed a love letter meant for Alma to her husband by mistake.

Mahler conducted his last concert in New York City on the 21 February 1911. He fell ill and traveled back to Austria with his wife. They arrived back in Vienna on the 12 May 1911, and Mahler died on the 18 May 1911. He was fifty-one years of age.

The Mahler family were Jewish. Mahler later converted to Catholicism.

Gustav Mahler had a heart condition which he inherited from his mother’s side of the family. He also suffered from anxiety and a nervous disposition.