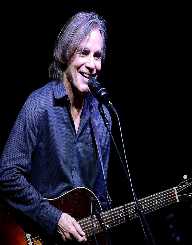 American singer, songwriter and musician Jackson Browne was born Clyde Jackson Browne on the 9 October 1948 in Heidelberg, Germany into an American family.

His father Clyde Jack Browne was a US serviceman, and his mother was Beatrice Dahl. The couple had four children, two girls, and two boys. When Browne was three years old, the family returned to the USA, and he was raised in California, living in Los Angeles as well as Orange County.

As a teenager, Jackson Browne became interested in folk music and began playing at local folk clubs, in time writing and performing his songs. In the mid-1960s, he was a member of the Nitty Gritty Dirt band when they first started out.  He lived in New York in 1967-1968 and was a member of Tim Buckley’s band.

He was also in a relationship with the singer Nico. She included three of Browne’s songs on her album Chelsea Girl including These Days, which he had written at the age of 16. After his relationship with Nico ended, Browne returned to California. By this time, various artists had performed his songs including Linda Ronstadt, Tom Rush, and the Byrds.

Then in 1972, after half a decade writing for others, he released his debut album, the highly acclaimed Jackson Browne, on David Geffen’s newly established label, Asylum Records. The album included songs such as Jamaica Say You Will, Song for Adam and Doctor My Eyes, and established Browne as a major singer-songwriter in the emerging Los Angeles country-rock genre.

Jackson Browne achieved success with multiple platinum-selling albums and a loyal following at home and internationally. Many of his songs have become LA country rock classics, and he was inducted into the Rock and Roll Hall of Fame in 2004.

Jackson Browne met American model Phyllis Major in 1971, and they were in a relationship until her death. They had a son Ethan Zane Browne in 1973, married in 1975 and in 1976, Major committed suicide.

His second wife was Lynn Sweeney, an Australian, whom he married in 1981. Sweeney and Browne had a son together, Ryan Browne is born in 1982 before divorcing in 1983. Browne was then in a long-term relationship with American actress Daryl Hannah until 1992. His current partner, since the mid-1990s, is Dianna Cohen.

Jackson Browne founded Musicians United for Safe Energy along with John Hall and Bonnie Raitt in 1979 and participated to the No Nukes Concert.  He is a longtime environmentalist and conservationist. For many years he has campaigned against the overuse of plastic bottles and is involved in the Plastic Free Backstage initiative.

Jackson Browne has received many acknowledgments for his activism including Environmentalist of the Year (2008) from the Surf Industry Manufacturers Association and Save Our Shores, awarded him an Ocean Hero Award (2011).