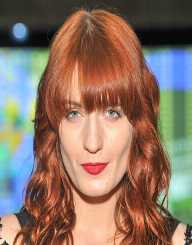 Florence Welch is an acclaimed musician and songwriter for her vocal performances with the Florence and the Machine band. Notably, their album ‘Lungs’ topped in the UK Chart List winning a Brit Award for Best British Album in 2010. Other successful albums by the band include, ‘Ceremonials’ and ‘How Big, How Blue, How Beautiful’ which also topped in the UK.

Florence Welch is a daughter of parents Evelyn Welch and Nick Russell Welch born on August 28, 1986, in Camber well London. Her father is an advertising executive while her mother is a professor at King’s College London.

Florence attended school at Thomas’s London Day School followed by her enrollment to Alleyn’s school. At an early age, she was diagnosed with dyslexia and dysmetria and begun drinking at the age of 14 to cope with her parents’ divorce.

After completing high school, she joined Camber well College of Arts but dropped out to focus on her music.

In 2007, she recorded alongside a band named ‘Ashok’ and released an album titled, ‘Plans on the Filthy Lucre? About Records Label’. The album contained her hit song, ‘Kiss with a Fist’ as ‘Happy Slap.'

On July 6, 2009, Welch and Machine released their album, ‘Lungs’ which debuted at No. 1 in UK and No.2 in Ireland selling over 100,000 copies in the UK. The album also ranked No.17 on the Billboard Heatseekers Albums Chart. During the consecutive year, Welch collaborated with David Byrne and Fatboy Slim on the album, ‘Here Lie Love’ and sang in place of Dido in her song, ‘If I Rise’ during the 83rd Academy Awards.

The Florence Robot/Isa Machine band released second album, ‘Ceremonials’ on October 31, 2011. This album debuted at No. 1 in UK Albums Charts and No. 6 on US Billboard 200. During the same period, Welch performed during Amy Winehouse tribute with the song ‘Back to Back’ and ‘Walking on Broken Glass.' Also, the band performed during the 40th Annual Dick Clark’s New Year’s Rocking Eve special in Times Square.

Notably, they were nominated for two Brit Awards in 2012, followed by a release of ‘Breath of Life’ that served as the theme song for the film, ‘Snow White and the Huntsmen.’ On July 2012, they released their fourth single hit song ‘Ceremonials’ featuring Calvin Harris.

Florence Welch also performed in Calvin Harris song, ‘Sweet Nothing’ which debuted at No.1 in UK Singles Chart, No.1 in Ireland and No.2 in New Zealand and Australia. The same period, she performed at O2 Arena in Lond with Mick Jagger in ‘Gimme Shelter.'

Florence+ Machine band released their third album, ‘How Big, How Blue, How Beautiful’ on June 1, 2015. They also made a performance on 26th June at the Glastonbury Festival. In 2016, Welch and Lady Gaga recorded the track, ‘Hey Girl’ followed by her appearance in ‘Song to Song’ in March 2017. On May 2017, she contributed ‘To Be Human’ in the film, ‘Wonder Woman’ that is performed by Sia and Labrinth on the movie’s soundtrack.

Florence Welch broke her feet during a stage performance at Coachella Festival in 2015. In 2011, Gucci dressed her for the summer concert tour and also during her performance at Chanel runway show that took place during the Paris Fashion Week.

She is an avid reader and has interest in works of authors such as Gwendoline Riley and David Vann. She participated in a book club named, ‘Between Two Books’

In 2010, Welch received an NME nomination as the Best Dressed followed by a Virgin Media Music Awards nomination and British Fashion Awards the following year. Gleefully, she also won an NME award for a dance floor anthem.