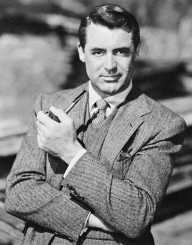 Archibald Alexander Leach was born on January 18, 1904, in Horfield, Bristol, England. His parents were Elsie (Kingdon) and Elias Leach. His mother was admitted to a mental institution when he was a small child, and his father left him when he was only ten years old, essentially leaving him an orphan.  It wasn’t until the 1930’s when he began acting that he started to use the name, Cary Grant.

As a child, Archibald Alexander Leach attended the Fairfield Grammar School. However, he was kicked out of school when he was only a teenager. As a teenager, Leach ran away from home to join a traveling group of performers. He was kicked out of the group for being too young, but he rejoined a few years later when he was the minimum age for joining the group, which was only 14. Some of his main talents with the group were not acting, which he is known for today, but instead for walking on stilts and juggling. When he was 16 years old, the troupe traveled to the United States to tour. When the tour was over (when he was 18 years old), Leach decided to stay in the States to pursue a career there.

Archibald Alexander Leach first acted in small plays in the states before moving on to perform on Broadway. He was loved by his fans and was known for his charm, good looks, and grace on the stage. He didn’t stay on Broadway for long. He moved to Hollywood in 1931, but he went by a stage name, Cary Lockwood. He later changed his stage name again to Cary Grant.

Cary Grant was in his first movie in 1932; This is the Night. He continued to have small parts in a series of movies in the early 1930’s. During this time, he held contracts with both Paramount Pictures and Columbia Pictures (not at the same time). Some of these movies are listed below.

Cary Grant signed a contract with MGM in the late 1930’s, which is around the same time that his career kicked off. His first movie with the company was Topper. This film would prove to be a success. He continued to produce wonderful movies with various film companies from the late 1930’s to the mid-1950’s. Some of these films are listed below.

Cary Grant began his own production company in the mid-1950’s called Granart Productions. He acted for this company, but many of his films were later distributed by Universal Pictures. He continued to act like this until the mid-1960’s. In 1966, his daughter was born, and he retired from acting to be a full-time father. Some of his last movies are listed below.

An Affair to Remember
Houseboat
That Touch of Mink
Father Goose

In his lifetime, Cary Grant was awarded almost a dozen acting awards. Some of his awards are listed below.

Cary Grant earned his star on the Walk of Fame in 1960. In 1981, he was awarded the Kennedy Centre Honors for his work with acting and entertainment.

Cary Grant was inducted into the Online Film and Television Hall of Fame for Acting in 2002. In 2005, a statue of Cary Grant was erected in Millennium Square.

Cary Grant was married five times. He was first married to Virginia Cherrill in 1934. The couple divorced only a year later. He married again in 1942 to Barbara Hutton. The two divorced amicably shortly afterward. His next marriage was to Betsy Drake in 1949. This marriage lasted longer than his previous two, but the couple still divorced in 1962. In 1965, he eloped to Dyan Cannon. This couple had one child (Grant’s only child) together: Jennifer Grant. However, this marriage ended in divorce in 1968. Cary Grant was married for the last time in 1981 to Barbara Harris. The marriage ended with Grant’s death.

Cary Grant suffered a stroke and died on November 29, 1986, in Davenport, Iowa, USA. He was 82 years old when he passed away.