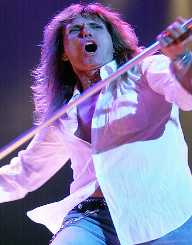 David Coverdale was born in the town of Saltburn-on-Sea, in the British province of Yorkshire. His birthdate was 22nd September in 1951. David Coverdale's family was one that had some music lovers and provided a ready inspiration for David in his early years. He started by singing-along while records played on the family’s vinyl. He started off with guitar playing, but as he grew, he stayed with vocals.

David Coverdale's family house was upstairs in a building that hosted a club underneath, which was run by his family. By age 14, David was already performing and developed his vocal strength so that he could excel as a rock musician. David went to attend an art college after that and worked with Denver Mule as well as Magdalene and the Vintage 67.

As the 70s set in, David Coverdale was set for new gigs, and this led him to the music tabloid called Melody Maker. He saw the advert which was showcasing an opening for a vocalist, and this was at the request of the famed Deep Purple band. As at the time, the band had the acclaim as a top global band for metal and hard rock. The exit of the group’s singer, Ian Gillan led to the search for a new vocalist, and this became the Launchpad for David to hit the limelight. He responded to the ad and was admitted to the group with open arms.

By 1974, the Coverdale gang launched the album “Burn,” and this began an instant hit with no restraints. The success of the album looked like a fairy for Coverdale who had just made an entry into the group. When the next album titled “Stormbringer” was released, the group already had fault lines which led to a breakup. Ritchie Blackmore was the bandleader as well as guitarist, and he no longer had an enduring interest in the group. The desire of his colleagues to infuse funk in their rhythm was a huge turn-off for him. Blackmore exited the group to form a core metal band called Rainbow.

David Coverdale had a staying power and refused to give up when the exit of Ritchie occurred. This led him to go in search of an erstwhile guitarist he knew worked on Billy Cobham’s Spectrum album. The new hand was Tommy Bolin, and Coverdale sought him out to become the new guitarist for the Deep Purple Band. By 1975, the band came out with “Come Taste the Band” and this was a new album post –Blackmore. This was, however, the last album before the Deep Purple split up in 1976. Coverdale moved on to become a solo artist with a deep accent of rock n roll with blues-rock infusion.

David Coverdale went on to put together a band of his own with two guitarists, namely Micky Moody and Bernie Marsden. The ensuing albums were released later on by him under the group name “Whitesnake.” This was a gimmick that the audience bought, but Coverdale was the real face of the group. As the group toured and staged performances, Coverdale was the only one who was constant as the others got switched from time to time.

The run of Whitesnake was launched when in 1980; the hit “Fool for Your Loving” hit the charts across the U.S. This was from the “Ready an' Willing” album. It made its way to the Billboard Hot 100 in America at the 53rd position. On the British end, it was placed in the 13th position. David Coverdale proved to be a headhunter when he John Sykes as a guitarist to work with his Whitesnake band. The effect of this was the release of “Slide It In” in 1984. The album was a huge hit in the United States.

David Coverdale was, however, unable to build on this momentum as he was hit with a sinus ailment. This made him go off singing for a season as his physicians feared he might never sing again.

David Coverdale re-emerged like a cat with nine lives after a lay –off that went past twenty-four months. Sykes exited the band on Coverdale’s prompting, and things were not looking good. By 1987, Coverdale and his band became chart-toppers again when they peaked at the second position in The American charts with a self-titled album, “Whitesnake.” They also had a top-selling single which was titled “Here I Go Again,” which made it to the first place on the singles chart.

David Coverdale was able to get Joel Hoekstra of the Night Ranger fame to join up with him for performances years down the line. He also worked with Tommy Aldridge, Michele Luppi, Reb Beach and Michael Devin in the tours he made in the decade to 2015. David Coverdale also worked with the stars above to churn out “The Purple Album” as a tribute to the years he spent with the Deep Purple band. They re-laid the tracks that the Deep purple worked on from the early years with David Coverdale.

The new effort by David Coverdale was timed as it also coincided with the induction of the rock star as a Hall of Famer in Rock and Roll. The attribution was a member of the famed, Deep Purple. This was done in December 2015.

David Coverdale was married to Julia Borkowski in 1974. The wife was a German, and they had a daughter in 1978 who they named Jessica. David, however, remarried in 1989 to Tawny Kitaen, who was an actress and former model. The pair could only last two years as they parted ways in April 1991.

David was back to the aisle in 1997 as he married Cindy. The union gave rise to Jasper, who was born in the year 1996.