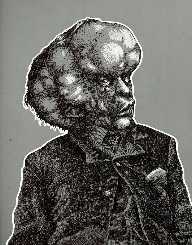 Joseph Merrick was born on August 5, 1862. He was an English man. He was renowned for his severe face and body deformities. He was also known for exhibiting at a freak show as Elephant Man. He died at the age of Twenty Seven years.

Joseph Merrick was born Joseph Carey Merrick in Leicester, England. He was born to Joseph Rockley Merrick and Mary June Merrick. He was born healthy with no signs or symptoms of deformities. He was brought up alongside two siblings. He later started showing signs of deformity by swelling in his lips.

In 1867, he started forming a lumpy skin which was also dark resembling that of an elephant. He later formed a bony lump on his forehead. His arms grew with a variation of size. His feet started enlarging. His skin also started being loose and rough. He later injured his hip after a fall which again increased his deformity. Merrick later joined a school for his studies.

In 1875, Joseph Merrick dropped out of the school. He later faced a harsh environment back at home and ran away in several occasions but was always brought back by his father. He later started working as a cigar roller in a certain factory. In 1878, he was relieved of his job due to the increment of the deformity in his right hand. He later started working as a door to door hawker selling haberdashery shop’s items. His hawking work did not go well due to the fact that the increment of his facial deformity affected his speech. He was later neglected by neighbors and his father.

In1877, he left home for good after being beaten severely by his father. He later hit the streets in search for housing and food. He was later rescued by his uncle who took him and offered him shelter. He later started hawking again which led to a less success than before. His hawking license was denied a renewal by the Hackney Carriages Commissioners. In 1879, he joined Leicester Union Workers.

In 1880, Joseph Merrick left the workhouse in search of another work. He later rejoined the workhouse since he did not get any work. In 1882, he underwent a facial surgery to remove the protrusion in his mouth that almost rendered him speechless and not able to eat. In 1884, he left the workhouse for an exhibiting career.

He was given the stage exhibition name Elephant Man (half elephant, half man). This new career became a success to him than all of his previous attempts. He was later taken to a hospital with Frederick Treves for some tests and corrective surgeries. He was later admitted to the hospital of bronchitis. His health status continued to deteriorate later and his head continued enlarging.