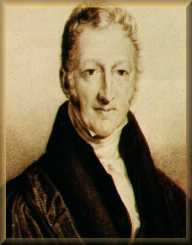 Thomas Robert Malthus was an English Economist born on February 13, 1766. Among his first work was Essay on the Principle of Population. It was not recognized much at the time but later came to the light years later in the 20th century. He was a graduate of Jesus College, Cambridge.  Among his close friends were John Marten, Edward Daniel Clarke, and John Marten.

He toured European countries along with these three friends from 1799. During this time he researched population data. Later in his career, he was nicknamed ‘pop’ for his work on population. He became Fellow of the Royal Society in 1818. He was also among the fellows of the Statistical Society in 1934. He was a father of three children.

Thomas Robert Malthus was born on February 13, 1766. His place of birth was in Westcott, Surrey, England. He was the 7th born child of Henrietta Malthus and Daniel.

Thomas Robert Malthus attained his elementary education at Bramcote, Nottinghamshire which was his home. He later joined the Warrington Academy in 1782. This is where he received his formal education. Unfortunately, his studies were interrupted when in 1783, the school was closed down.

Fortunately, he was later admitted to Jesus College, Cambridge in 1784. He was able to learn Greek, Latin and English narrative. He later graduated with a degree on these subjects. He then began his Master's studies. By 1791 he earned his Master’s degree, and he was appointed a Fellow of Jesus College.

Thomas Robert Malthus began his career by releasing Essay on the Principle of Population. The work was fairly received which was not bad for a start in his career. He still had a long way to go. However, in the 20th century, this work gained recognition in the field of economics.

He worked on his essay of 6 editions from 1798 and was through in 1826. It was titled An Essay on the Principle of Population. He traveled to European countries in 1799 along with three of his friends. He collected data on population during this tour.

He settled in France in 1802 then later in Switzerland. He joined the East India Company College situated in Hertfordshire years later in 1805. He served as a professor of Political Economy and history at the institution. At the time, no one had ever served the position. Hence he became the first. He continued his work on population and earned himself the nickname ‘Pop.’

He became Royal Society’s Fellow in 1818. He later established the Political Economy Club in 1821. He was elected by the Royal Society of Literature to be among its ten royal associates in 1824. In 1834, the Statistical Society came into existence. Thomas had the honors of being its First fellows that same year.

Thomas Robert Malthus tied the knot with Harriet in 1804. Together they had their first born a son named Henry. Their second child as a girl and they named her Emily. They later had their last born a daughter as well and named her Lucille.

Thomas Robert Malthus took his last breath on December 29, 1834. He was aged 68 when his death occurred in Somerset situated in England.