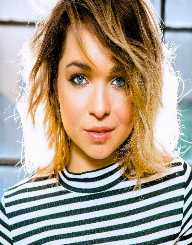 Alannah Myles was born in 1958 in Canada as Alannah Byles. Her father was William Douglas Byles, a famous Canadian broadcaster, so Alannah had a musical background already since very early childhood years. She started writing songs herself very early - at the age of nine. When she reached the age of twelve, she was writing songs for a Music Festival “Kiwanis” in Toronto.

A few years later, when Alannah Byles reached the age of eighteen, she started performing in Ontario. Her solo performances led her to meet Christopher Ward, a recording artist. Christopher Ward helped Myles form a band, and motivated her to work on a couple of cover songs, while also working on her music. A year later, at the age of nineteen, Byles decided to change her name to Myles. She made this decision so that the surname would fit the industry better.

Alannah Myles appeared in television series “The Kids of Degrassi Street” in 1984. Her role was as a single mother, who was an aspiring singer. She made a couple of appearances in the series. She worked on several other projects, commercials on television, to be able to support her recordings.

Initially, it did not go well, until she released the song “Who Loves You” and recorded a video for a song “Just One Kiss.” She worked as an actress until around 1989, when she left it to focus on working in music fully.

Alannah Myles released her first album called “Alannah Myles” at the age of 25. David Tyson helped Myles with the production of it. It was published in 1989 by Atlantic Records. After the release of this album, Alannah Myles went on a tour that lasted for 1,5 years. The collection was sold in over a million copies, and therefore earned a Diamond Award.

Alannah Myles was the very first Canadian artist who has received this award. Internationally the album was sold even better – around six million copies sold and is still considered a very well selling album. The top songs from it were “Lover if Mine,” “Still Got This Thing For You” and “Love Is.”

In 1990 Alannah Myles released the song “Black Velvet.” This became a worldwide hit and is to this day remains a classic hit. It stayed at the top of the Billboard Top 40 Chart in the United States for two weeks. Later the song received a Grammy Award.

It was awarded for the best female rock vocal performance, and awarded in 1991. “Black Velvet” became the most played radio song in 1990. Ten years later ASCAP awarded the song a “Millionaire Award,” as it had been played on the radio for more than five million times.

In 1992 Alannah Myles released a second album. It was called “Rockinghorse,” and produced again by Atlantic Records. This album was also a success, and for the album title song “Rockinghorse” Alannah Myles was again nominated for the Grammy Award for best female vocal rock performance. Other noteworthy songs from the album include “Song Instead of a Kiss,” “Sonny, Say You Will,” “Our World, Our Times.” This album earned Alannah Myles Juno award and Much Music’s People’s Choice award.

The last album Alannah Myles recorded with Atlantic Records was “Alannah” in 1995. Two songs from this album “Family Secret” and “Blow Wind, Blow” reached a Top 100. After the release of this album, Myles left Atlantic Records to work with the Ark 21 Records. Ark 21 Records was a company of Miles Copeland, who was at the time Myles’s manager. Alannah Myles released an album “A Rival” with this company. The most noticeable song from this album was “Bad 4 You”, as it reached the Top 40

Alannah Myles worked with Ark 21 Records until 2014. She got her copyrights returned by the end of next year, and further on from 2015 re-released in Fascinate Inc., a label owned by herself.

For almost ten years after releasing two albums “Best Of” in 1998 and 2001, Alannah Myles was not recording new songs. She did several tours all over the world and some covers.

In 2005 she returned to perform in the Eurovision Song Contest. She performed with a Swedish band “Kee Marcello’s K2”. The song “We Got It All” was not too successful, and ended up being the No.7 out of eight songs. Regardless of this, it was highly popular in Sweden.

After the quiet decade, Alannah Myles released a song in 2007. The song was honoring Elvis Presley’s death precisely thirty years before.

The next year Alannah Myles released another album. It was her fifth album and was called “Black Velvet.” Currently, Alannah Myles is working on her own label Fascinate Inc.