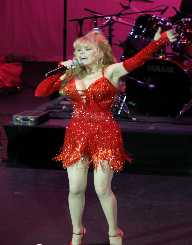 Charo was born 15th January 1951. She was born in Molina de Segura, in the Region of Murcia, Spain. The first version is that Charo studied at a convent until she was 15. The other story states Charo studied both classical and flamenco guitar at a school in Madrid for underprivileged children and graduated when she was 16. Both versions of her childhood were described by Charo herself.

Charo began appearing on television in the U.S. during the mid-1960s. Her debut performance was on The Today Show, but in 1965 she began performing on The Ed Sullivan Show and made four appearances over a two-year period. In the late 60s, she appeared on Laugh-In and was a regular at the end of the show with Dan Rowan and Dick Martin. It was during this period that she became known for her phrase, “cuchicuchi.” By the early 1970s, Charo was a headline act in Las Vegas. Through the 70s, Charo became a very well-known personality. She appeared on many shows including, The Love Boat, Donny & Marie, and The Mike Douglas Show.

Charo oversaturated the market with the number of appearances she made, and some in the population became a little bit tired of her. In the late 1980s, Charo moved to Hawaii. She opened a dinner theater restaurant that she performed in herself. She and her husband raised their son in Hawaii until the late 1990s. During the 2000s, Charo began doing television commercials and started making appearances on shows like Hollywood Squares, and The Surreal Life.

Charo continues to tour, as well as performing in Las Vegas and other cities. She has also started making regular appearances on celebrity cruises and television. Charo released six albums between 1977 and 2005, and 12 singles between 1976 and 2013. She has been in 11 movies and has appeared in over 30 television shows.

Charo’s flamenco album, won the Female Pop Album of the Year award in 1995 at the Billboard International Latin Music Conference.

In 1966, Charo married Xavier Cugat. Cugat had his band, and when they married, Cugat was 66. The couple divorced in 1978, with Charo ascertaining that the marriage had been a business arrangement to enable her to move to the U.S.

Charo’s second marriage was toKjellRasten in 1978, with whom she had a son. Rasten is a movie producer.

Not only does Charo have two different stories circulating about her childhood, but there is controversy about her age as well.