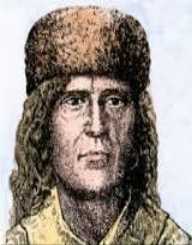 French-Canadian explorer Louis Joilet was born in Quebec and christened on the 21 September 1645. His father, Jean Joliet, was a wagon-maker who worked for the Company of New France. And his mother was Marie d’Abancourt. He also had a brother Adrien.

Louis Joilet's parents wanted him to study for the priesthood, and he was enrolled at a Jesuit College in Quebec in 1655. In 1667, he decided against becoming a priest.

Louis Joliet became interested in exploring North America and is considered the first Canadian born explorer. When he was 23 years old, he became a wood-runner or bush-loper, the French term at the time being a coureur de bois.

In late 1668, he fitted himself out with trade goods. The funds to pay for the trade goods came from a loan from Monsignor Laval, the Bishop of Quebec. Joilet’s mother had guaranteed the loan.

Louis Joliet was at Sault Ste Marie on the 4 June 1671 when Simon Daumont de Saint-Lusson took possession of the lands of the western interior for France. The vast territory was claimed in the name of Louis XIV, and Joilet was one of the signatories on the proclamation

Joilet returned to Quebec in September 1671. At that stage, he was aware of the existence of the Mississipi River and Jacques Marquette’s idea to journey there. Jean Talon, on the eve of his departure for France, persuaded the Governor Frontenac, the governor of the colony, to support the plan. The expedition was tasked with determining whether the Mississipi flowed into the Gulf of México.

Louis Joliet recruited six coureurs de bois, and they left Quebec in early October 1672. On the 8th December 1672, they arrived at St Ignatius mission at Michilimackinac. In May 1673, the explorers began their journey by canoe down the Mississippi.

In July, after reaching what is today the border between Louisiana and Arkansas, they turned around fearful of running into Spaniards in Florida. Their journey confirmed that the Mississippi empties into the Gulf of México.

The explorers returned home in mid-1674. On the return journey, Louis Joilet required rescuing when his canoe turned upside down in the Lachine Rapids. He was in the water for four hours and lost everything including his map and dairy.

Louis Joliet married Claire-Francoise Bissot in 1675. Joilet got involved in the fur trade and was given a grant of land on the Mingan Archipelago on the banks of the lower St Lawrence. He became a merchant and in 1680, acquired Anticosti Island.

In 1679,  Louis Joliet was tasked with travelling overland to Hudson Bay to assess the English presence and their commercial dealings with the local people. Joilet left with seven others on the 13 April 1679.

They travelled as far as Lake St John, Lake Mistassini, and the Rupert River before reaching James Bay. Meeting with the English, they offered him employment, but he declined and headed back to Quebec.

Louis Joliet was recognised at home and in England and France for his mapping ability. The information he provided allowed mapmakers to draw up maps which were published in Paris in 1681. He also had produced a map of the St Lawrence River which was released.

Louis Joliet went on a voyage of exploration in the Labrador area in 1694 where he investigated the coastline. The ship departed on the 28 Apri 1694. They travelled up as far as the 56th parallel, and as it was by then the beginning of autumn, they resolved to return home.

The voyage was the first time an explorer had returned home from such a successful expedition along the Labrador coast. Joilet had kept a detailed diary, with sketches and descriptions of the people he encountered.

Louis Joliet was Professor of Hydrography at the College of Quebec from 1697. Louis Joliet died on May 1700. He disappeared after leaving for Anticosti Island.