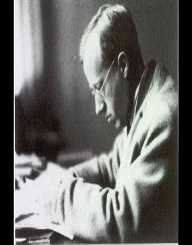 Composer Gustav Theodore Holst was born on the 21 September 1874 in Cheltenham, Gloucestershire, England. He was the son of Adolph von Holst and Clara Cox Lediard. His mother was British and a singer who died when he was eight years old. His father a musician, choirmaster, organist, pianist, and music teacher was of Scandinavian, German and Latvian ancestry. His grandfather was Gustavus von Holst from Latvia, a composer of music for the harp. Holst had two siblings.

Holst came from a musical family, and at an early age, and was taught violin, piano, and the trombone. He began composing started when he was young, and he was influenced by Sullivan, Chopin, Grieg, and Mendelssohn.

Gustav Theodore Holst was a pupil at Cheltenham Grammar School (1886-1891). After completing his schooling, he studied at the Royal College of Music. It was there that he met fellow student Ralph Vaughan Williams in 1895. The two became friends, and this turned out to be a friendship that lasted a lifetime.

In the early 1900s, it was difficult to make ends meet as a composer and so taught Holst taught singing to augment his income. In 1904 he became the musical director at St Paul’s Girls School in Hammersmith.

Holst remained in this position for the rest of his life although he continued his composing and traveled to the United States. He lectured at both the University of Michigan and Harvard University.

His first position was as choirmaster and organist at Wyck Rissington in Gloucestershire, England. Part of this meant that he was the conductor of the Bourton-on-the-Water Choral Society.

In 1891 he performed with his father in Cheltenham where they played the Brahms Hungarian Dances. He composed the music for the operetta, The Sorcerer of Tewkesbury (1892) which was met with success. The following year he went to London to study at the Royal College of Music.

During his time at the Royal College of Music, Holst studied composition under Charles Villiers Stanford. He also met Ralph Vaughan Williams and developed a friendship which lasted all his life. Holst supported himself by playing the trombone professionally. In 1897 he took part in a symphony concert at Queen’s Hall which was conducted by Richard Strauss. During his student years, Holst was exposed to the music of Richard Wagner, and this became another influence. Later influences also included Henry Purcell and William Morris.

When William Morris died in late 1896, Holst composed a lament in his memory. Three years later the Bournemouth Municipal Orchestra premiered the piece. After traveling to Germany on holiday in 1903, Holst decided to concentrate on composition. He gave up playing in orchestras and instead took up a teaching position at James Allen’s Girl’s School, Dulwich to support himself. (1903-1921). At the same time, he was teaching at the Passmore Edwards Settlement. He was also the director of music at St Paul’s Girls School in Hammersmith (1905-1934) and director of music at Morley College (1907-1924),

Gustav Theodore Holst married Emily Isobel Harrison on the 22 June 1901. She was a soprano he had met and fallen in love, waiting until he could support them before proposing marriage. The couple had a daughter, Imogen (b.1907).

Holst wanted to enlist in WWI but was rejected because of his physical condition.

Holst’s health was never right, and he was a fragile child who suffered from asthma and neuritis. He was also sensitive and suffered from anxiety. His eyes troubled him as well. During his student years in London, he became a vegetarian and decided to abstain from alcohol.

Despite his frail health, Holst’s hobby was hiking. He hiked in England and Europe and once did a tour of Morocco on a bicycle.

During his following years, Holst was able to use new technology to promote his form through sound recordings; this included BBC radio broadcasts.

Four years before his death in 1934, Gustav Theodore Holst had a severe fall from the conductor’s podium which impacted on his already frail health. He developed stomach problems, and on the 25 May 1934, he died in London after an operation.