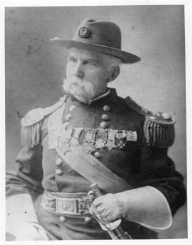 Joshua  Chamberlain was an American college professor and politician who joined the Union Army during the American Civil War as a volunteer. Born September 8, 1828, he gained fame during the Battle of Gettysburg, earning him the Medal of Honour. Joshua  Chamberlain became a high-ranking member of the army reaching the rank of brigadier general. In 1862, Joshua  Chamberlain was commissioned into the 20th Maine Volunteer Infantry gained promotion as the commander of the regiment and led the army during the Battle of Gettysburg on July 2, 1862, helping to drive away the Confederate army at the Unions line at Little Round Top.

In June 1864, Joshua  Chamberlain wounded during the Second Battle of Petersburg. Due to the severity of the injury, he was given a deathbed promotion to brigadier general because it was thought he would not survive. However, he was able to recover and served in the army unit the end of the war. Chamberlain joined politics as a member of the Republican after the war and served a term of four years as the 32nd Governor of Maine.

Joshua  Chamberlain was born on September 8, 1828, in Brewer, Main to Sarah Dupee and Joshua Chamberlain. He was the first child of five by his parents. As a child, Joshua  Chamberlain embraced Christianity and sang in the choir. Due to his passionate involvement in the church, his mother favored him being a preacher while his father wanted him to join the military, but he was not enthused with any. Growing up, Joshua  Chamberlain suffered speech impairment, but it improved later after graduating from Bowdoin College. With the assistance of a local tutor, Professor William Hyde, he gained admission to the Bowdoin College in Brunswick, Maine in 1848. To pass his entrance exams, he had to learn how to read Ancient Greek and Latin.

In Bowdoin, Joshua  Chamberlain made friends with many people including Harriet Beecher Stowe, wife of Bowdoin professor Calvin Stowe, who would become very influential in his life. He also became a member of the Peucinian Society, which was a group of student with Federalist learning. In 1852, he graduated as a member of the Phi Beta Kappa academic honor society. He later pursued a three years course at the Bangor Theological Seminary in Bangor, Maine.

Even though he was a professor, Joshua  Chamberlain fell responsible to garnered support for the Union against the Confederacy. He used part of his lecturing period to urge his students to choose a side but noted that the cause of the war was just. Joshua  Chamberlain developed a strong passion to join the war and so wrote to the Maine Governor, Israel Washburn, stating that, "I fear, this war, so costly of blood and treasure, will not cease until men of the North are willing to leave good positions, and sacrifice the dearest personal interests, to rescue our country from desolation, and defend the national existence against treachery."Joshua  Chamberlain was then granted a leave of absence and therefore joined war without the knowledge of his family and those at Bowdoin. In the Union Army, he was first offered the rank of a colonel of the 20th Maine Regiment, which he rejected because he wanted to start at the lower rank and rise subsequently. On August 8, 1862, he was appointed to the rank of lieutenant colonel under the command of Col. Adelbert Ames. One of his brothers,

Joshua  Chamberlain was also an officer in the 20th Regiment. The 20th Maine fell under the 3rd Brigade, Ist Division, V Corps in the Union Army of the Potomac and fought in the Battle of Fredericksburg through which they suffered some casualties. In June 1863, he was promoted to the rank of a colonel of the regiment when Col. Ames was promoted.

Joshua  Chamberlain orders as the colonel in the 20th Maine Regiment led to the victory of the Union Army in Gettysburg during the second day of battle on July 2, 1863, positioned on the Little Round Top. The Union army was also able to capture about 101 soldiers of the Confederate Army. This achievement made Chamberlain very popular in the regiment. During that battle, he sustained two minor injuries and was able to seize a revolver from one of the Confederate soldiers who tried to shoot him. This pistol is currently on display at Maine State Museum’s Civil War exhibit.

About 30 years after that battle, he received a Medal of Honour in 1893, for his "daring heroism and great tenacity in holding his position on the Little Round Top against repeated assaults, and carrying the advance position on the Great Round Top." Nonetheless, there have been some controversies as to whether Chamberlain really issued the command that led to the victory.

Joshua  Chamberlain was promoted to the rank of brigade commander after his return to the Army of the Potomac in April 1864. He was then given the command of the 1st Brigade, First Division, V Corps for the siege of Petersburg. During the Second Battle of Petersburg on June 18, Joshua  Chamberlain was shot through the right hip and groin, with the bullet exiting his left hip.

However, with his sword stuck to the ground, he stood upright in order to prevent the army from retreating. This led to a severe loss of blood and as a result, collapsed. The severity of the wound divided’s surgeon predict his death. This was reported in the Maine Newspapers, which led to Lt. Gen. Ulysses S. Grant promotes Joshua  Chamberlain to the rank of a brigadier general as recommended by the corps commander Maj. Gen. Gouverneur K. Warren as they all thought he would die. He, however, amazingly recovered and by November that year. He was urged to resign by many including his wife, but he was willing to serve to the end of the war. He took charge of the1st Brigade of the 1st Division of V Corps and was part of the Quaker Road battle which would at the end complete the war. Joshua  Chamberlain once again was shot in the left arm and chest that nearly led to amputation. He gained the nickname, "Bloody Chamberlain" at Quaker Road.

After the war, he left the  US Army and commenced a political career. His popularity during the war made it easier to win the Governor of Maine contesting on the ticket of the Republican in 1866. He received 69, 637 votes representing 64.4 percent of the total vote cast which became a record being the percentage for any Maine governor by that time. He broke his own record during his second term of office by receiving 75,523 representing 72.1 percent of the vote in 1868. He returned to the academia by joining the Bowdoin College after leaving office. He was appointed the president of the College in 1871 and would head that position until 1883. From 1897 to 1871, he served as anex-officio trustee of Bates College. He became a founding member of the Maine Institution for the Blind in Portland currently called The Iris Network.

Joshua  Chamberlain married Fanny Adams in 1955. The couple was blessed with five children. Two of the children could not survive infancy, and one was born prematurely. He died in 1914 at age 84 of complications from wartime wounds at Portland, Maine. Joshua  Chamberlain was buried at Pine Grove Cemetery in Brunswick, Maine.