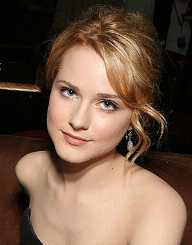 Evan Rachel Wood was born on the 7 September 1987 to Ira David Wood III and Sara Wood. Her father David is ane sister, Aden.

David Wood III founded the Theatre In The Park in Raleigh. Wood’s interest in acting started at a young age. When she was nine years old, her parents separated. Wood moved to Los Angeles with her mother and one of her brothers.

Wood was enrolled at a public school in Cary, North Carolina but was predominantly home-schooled. She received her high school certificate age at 15.

Wood has appeared on television series and in film. One of her early appearances was in Practical Magic (1998). In 2002 she played Al Pacino’s character’s daughter in S1mOne. Then in 2003 Wood made a name for herself in Thirteen. She won a Golden Globe nomination for Best Performance by an Actress in a Motion Picture. She also was nominated for a Screen Actors Guild Award - Outstanding Performance by a Female Actor in a Leading Role. This was followed by a Golden Globe and Emmy nomination for Outstanding Supporting Actress in a Miniseries or Movie for her role as Veda Pierce in the miniseries Mildred Pierce (2011).

As well as her acting career, Wood’s is a musician, and she performs with her band Rebel.

Wood continues to act in a variety of film and television roles. These include the film The Ides of March (2011) as well as the miniseries Mildred Pierce (2011). She played Queen Sophie-Anne in the television series True Blood between 2009 and 2011. A recent success has been HBO’s Westworld (2016), a sci-fi fantasy thriller. Wood’s received a Golden Globe nomination for her role as Dolores Abernathy in Westworld. She is on record as saying that Westworld has been a phenomenal experience for her as an actor.

Wood had a much publicised relationship with Marilyn Manson in 2007. Wood married actor Jamie Bell in 2011, and they had a son. They divorced in 2014.

Wood is an advocate for the LGBT community and is frank about her own bisexuality which she says she has been aware of from a very young age.