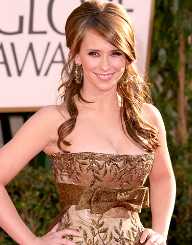 Jennifer Love Hewitt was born on February 21, 1979. She is an American actress, director, producer, singer, and songwriter. She began acting like a child by appearing in the series ‘Kids Incorporated’. Love became famous in the teen drama ‘Party of Five’ with her role as Sarah Reeves. She released her first album ‘Love Songs’ in 1992. Love has appeared in a lot of films including ‘I Know What You Did Last Summer,’ ‘The Client List’ and ‘The Ghost Whisperer’ among other films.

Jennifer Love Hewitt was born on February 21, 1979, in Waco, Texas. She was born to Herbert Daniel (father) and Patricia Mae (mother). She has one sibling, Todd Hewitt. Love was attracted to music at a young age. She sang the song ‘The Greatest Love of All’ at a livestock show. At the age of 5 she began taking ballet and tap dancing classes. She was then made a member of the Texas Show Team.

At the age of 10, Jennifer Love Hewitt won the title of ‘Texas Our Little Miss Talent Winner.’ This title drove her to pursue a career in singing and acting. She made her first appearance in the series ‘Kids Incorporated’. In 1992, she appeared in the film ‘Machie’. She also starred in ‘Little Miss Millions’ in 1993. She attended Lincoln High School in Los Angeles. She got a role in the series ‘Party of Five’ which aired in 1994.

In 1994, Jennifer Love Hewitt played a role in ‘Party of Five,’ ‘The Byrds of Paradise’ and ‘McKenna.’ She released her own album ‘Jennifer Love Hewitt’ in 1996. In 1997, she got a role in ‘I Know What You Did Last Summer’ which brought her a lot of fame. In 1998, she also played a role in the sequel ‘I Still Know What You Did Last Summer’. In the same year she also starred in ‘Can’t Hardly Wait’ and ‘Time of Your Life’. In 2001, she acted and co-produced the film ‘The Audrey Hepburn Story’. In the same year she starred in the romantic comedy ‘Heart Breakers’.

In 2002, Jennifer Love Hewitt released her fourth album ‘BareNaked’ which was number 37 on the Billboard 200. In the same year she appeared in ‘The Tuxedo’ alongside Jackie Chan. She has also done voice notes for animations such as ‘The Hunchback of Notre Dame’. She sang and co-wrote the songs ‘Love Will Show You Everything’ and ‘Take My Heart Back’ in the film ‘If Only’. She appeared in ‘Garfield’ which was a hit. Her acting prowess continued to be seen in the series ‘Ghost Whisperer’. Love authored the book ‘The Day I Shot Cupid’ and appeared in ‘the Client List’ in 2010. She starred alongside Joel David Moore and Ivan Sergei in the comedy film ‘Jewtopia’ in 2012.

Jennifer Love Hewitt was engaged to actor Ross McCall, but they broke the engagement three years later. In 2013, she married actor Brian Hallisay. They have a daughter together.