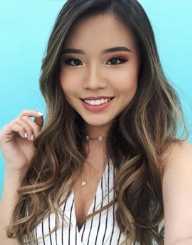 Jasmine Anne who is popularly known by her nickname Jazzy Anne is a child YouTube personality. She was born on August 11, 2002, in Austin which is located in Texas, United States of America. Jazzy is a multiracial American as her father is a Canadian while her mother is a Filipino. She was raised in Texas with her two elder brothers named Jordan and Joshua.

Jazzy Anne’s tryst with the popular video posting platform YouTube started in the year 2012 when she first posted her audition video. The audition which was done for the SevenAwesomeKids channel quickly managed to capture the hearts of the audiences. People widely accepted the young star and the video became quite popular. Seeing the tremendous response to her first video, Jazzy decided to open her channel on YouTube.

In the same year, Jazzy Anne launched her own YouTube channel titled ‘JThreeProductions.’ Jazzy began posting videos which showcased snippets from her daily life like makeup routines, gifts she received on her birthdays, etc. The audiences found her videos very relatable and soon enough, the subscriber count of her channel began to increase rapidly. At present, she has over 392,924 subscribers on her channel.

After tasting success with her own YouTube channel, Jazzy Anne gained more fame by becoming a part of the famous all-girls YouTube channel named ‘SevenSuperGirls.’ SSG is the most extensive all-girls partner collaboration on YouTube. The channel features fun videos like the after school routines of the girls, their makeup routines, their day-to-day adventures like finding a creepy doll, their Christmas celebrations, etc.

Apart from Jazzy, the channel has a few more girls as its channel partners viz. Kaelyn Olivia, Mimi Turner, Jenna Marbles, Ellie Louise, Nicole Luellen, Emily Jade, Katherine, and Rachael. All these girls are YouTube sensations in their rights and all of them have their personal YouTube channels too. After Jazzy joined the SevenSuperGirls, the viewer base of the channel grew manifold, and currently, the channel boasts of over 6.8 million subscribers.

One of the most viewed videos posted by Jazzy Anne was ‘Jazzy’s Buried Treasure Hunt!’. She posted the video on the SevenSuperGirls channel on July 2015 and within three months, the video garnered over 3 million views! Apart from collaborating with the SevenSuperGirls, a few of Jazzy’s videos also features her brother Jordan and Joshua. She and her brother Joshua made a few hilarious videos that show the way they react when they taste disgusting foods. Jazzy’s videos mostly revolve around things that teenagers like her find fascinating. Her curiosity, pleasing nature and ability to crack jokes are the main attractions in her videos.

Jazzy Anne was also a part of Community Theater. She essayed the role of Molly in the play Annie Jr. when she was barely seven years old. Jazzy became a YouTube sensation at quite a young age but she did not let fame go to her head. She is a well-grounded and humble young girl who enjoys superstardom on social media. She has over 370k followers on Instagram and over 20.2k followers on Twitter. She loves to interact with her fans and keeps them updated on her life through her social media profiles.

Jazzy Anne's parents met at a University and got married soon afterwards. She loves traveling with her family and her favorite vacation spot is Hawaii. Her hobbies include craft-making and reading books. Being an avid reader, she reads a lot of books but her favorite book series is the ‘Dork Diaries.’ Unlike other kids, she is not fond of eating chocolates. The 15-year-old is currently single and has never been a part of any controversy to date. She loves her work and most of her videos end with her saying ‘Have a Terrific Tuesday’!