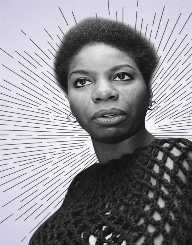 American singer, songwriter, pianist and civil rights activist Nina Simone was born as Eunice Kathleen Waymon on February 21, 1933, in Tryon, North Carolina, United States of America. She is known for her work in many genres as she sang a mix of jazz, blues and folk music in the 1950 and 60s and regenerated her singing career spectacularly in the 1980s. From a very early age, she showed her interest in music and participated in her church’s choir. She started learning piano at the age of 3.

Nina was very ambitious and was very keen to be recognized as the first major African-American concert pianist. Her music teacher helped in raising a special fund for meeting the expenses of her education. With the help of this fund, she attended the Allen High School for Girls in Asheville, North Carolina and graduated from there. After finishing her high school education, she attended the famous Juilliard School of Music of New York utilizing the balance amount of that special fund. She learnt to play piano and appeared as an accompanying performer for other main performers while studying at Juilliard. However, she had to leave Juilliard as she soon ran out of money.

During her time in the summer of 1950 in Juilliard, Nina Simone prepared herself for an audition at the Curtis Institute of Music in Philadelphia. After leaving Juilliard, Simone moved to Philadelphia along with her family with the expectation of gaining entry into the Curtis Institute of Music. Unfortunately, her application for admission into the Institute was rejected. The rejection left her heartbroken as the level of her aspersion involving Curtis was unusually high.

Nina Simone promptly leveled allegation of racial prejudice as the suspected reason behind denying her the opportunity of entering Curtis. Frustrated and discouraged, she arranged for a private piano lesson with Vladimir Sokoloff, a professor at Curtis. She never reapplied to the Institution. To make both ends meet, she started working as a photographer’s assistant and also began performing as an accompanist at Arlene Smith's vocal studio besides taking piano classes at her home.

While giving piano lessons at her home, Nina Simone was informed by one of her particularly poor student that she can earn as much as $90 a week by performing the dual role of singing as well as playing piano in a bar in the Atlantic City during the summer. She did the same and started performing at the Midtown Bar & Grill on Pacific Avenue in Atlantic City. To camouflage her identity from her overtly religious mother, who would have staunchly prohibited her from even walking into a bar let alone singing and performing there, she adopted a stage name, Nina Simone. Nina was her nickname lovingly addressed by her old boyfriend named Chico, which meant little girl in Spanish. Simone was inspired by the name of famous French actress Simone Signoret.

During the late 1950s, Simone started recording her music and eventually released her first album in 1957 featuring the title track "Little Girl Blue" and “Plain Gold Ring” among other tracks. The album also included the track "I Love You Porgy," her only Billboard top 20 success in the United States. She later moved from the Midtown to more upscale supper clubs in Philadelphia and gradually built an audience who got addicted to her innovative fusion of styles.

Nina Simone was trained in the classical style of music along the lines of Beethoven and Brahms and later started singing a mix of jazz, blues, and traditional folk songs shading her classical repertory. Starting from the late 50s, she released a horde of albums under different labels throughout the 60s and also the early 70s. ‘The Amazing Nina Simone’ (1959), ‘Nina Simone Sings Ellington!’ (1962), ‘Wild Is the Wind’ (1966) and ‘Silk and Soul’ (1967) are some of her most famous albums of this period.

In 1964, Nina Simone changed her record distributors from the American Colpix to the Dutch Philips. With this change, the contents of her songs also changed. Her African-American origin profoundly influenced her latest albums like ‘Nina Simone in Concert’ (live recording 1964). She wrote the song "Mississippi Goddam" in response to the June 12, 1963, assassination of Medgar Evers and the September 15, 1963, bombing of the 16th Street Baptist Church in Birmingham, Alabama that killed four young African-American girls.

Nina Simone openly voiced her concern for the first time and addressed the racial inequality that was prevalent in the United States through the song. “Mississippi Goddam,” later became an anthem of sorts for the civil rights movement drawing applause and admiration from the likes of Langston Hughes, James Baldwin, Miriam Makeba and Stokely Carmichael. Simone was considered a true singer of the civil rights movement and contributed songs like “Sunday in Savannah,” “Backlash Blues,” and “To Be Young, Gifted, and Black.” The latter song was declared by the Congress of Racial Equality (CORE) to be the black national anthem.

During the mid-70s, Simone took a break from recording. Having seen America’s deeply divided racial politics from close quarters, she left the country and went on to live in several different countries including Liberia, Switzerland, England, and Barbados and finally settled in the South of France. She had to struggle with some psychological problems affecting her mental health severely as also financial problems for which she fought with the managers, record labels, and Internal Revenue Service. She came back in 1978 with the album ‘Baltimore.’ Critics received the album warmly. However, the commercial response was weak.

Nina Simone underwent a career revival in the 1980s and her song "My Baby Just Cares For Me" was used in a Chanel No. 5 perfume commercial in the United Kingdom. The song became a top 10 hit in England during 1985. She wrote her autobiography ‘I Put a Spell on You,’ which was published in 1991 and her next recording ‘A Single Woman’ was released in 1993.

In 1961, Nina Simone married a New York police detective, Andrew Stroud, who later became her manager. The couple had a daughter, Lisa Celeste. They later divorced in 1970.

Simone died at the age of 70 on April 21, 2003, at her home in Carry-le-Rouet, France. She was reportedly battling breast cancer in her final days.