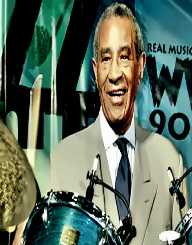 Max Roach is remembered as the drummer who changed the heartbeat of jazz. His new fusions gave birth to a new order in the ballroom music.

Maxwell Lemuel Roach was born on January 10th 1924. His parents Alphonse and Cressie Roach were black farmers from Newland, North Carolina. At the age of four, his parents moved to Brooklyn, New York. The elementary school he went to encouraged music. Children were even allowed to carry home the instrument from school. His mother also influenced him. She was a gospel singer. When not in school, their parents would leave them at church. It is there that they practiced how to play various musical instruments.

Max Roach graduated from Boys High School in 1942. After a stint as a recording artist, he returned to school. Roach joined Manhattan School of Music in 1950. In 1953, he got a Bachelor Degree in Music. Later in 1990, the school gave him an Honorary Doctorate. He was also to become a music professor at the University of Massachusetts.

Soon after graduating from high school, Max Roach started performing in local jazz clubs. New York had a vibrant jazz community. He would perform in several streets around the neighborhood. In 1943, Roach landed his first professional recording with jazz maestro Coleman Hawkins. He would later go to perform with other jazz musical greats in the 1940s. Notable are Lester Young, Benny Carter, and Stan Getz among others.

He teamed up with other artists to create the bebop. Bebop was a new fusion of jazz that emphasized on more intense rhythms. From 1947 to 1949, Roach was the bebop drummer guru. He toured several concerts with his colleague Charlie Parker. His early albums were Woody n You, recorded in 1944. Then in came Birth of the Cool, recorded in 1949.

Together with Charles Mingus, they formed Debut Records. The label organized a concert in May 1953. Known as the Jazz at Massey Hall Festival, it was the biggest jazz concert in the US. In 1954, he joined Clifford Brown to form a group. In a fatal accident, Brown died. Roach went into alcoholism. He later recovered and started recording with Monk and Rollins.

During the civil rights campaign in the 1960s, many used music to express their views. Max Roach was not left behind. Though he was not politically active, he recorded “We Insist Freedom Now Suite” in 1960. Throughout his career, he supported the civil right movement. Roach later did a fusion of his drumming with the “I Have A Dream” speech. He did other fusions with many black rappers in the US. Music was his way of helping in the struggle for equality.

Max Roach married Mildred in 1949. They had a son Daryl and a daughter Maxine. He had a son, Raoul, out of wedlock with singer Barbara Jai. His second marriage was with singer Abbey Lincoln. The marriage lasted between 1961 and 1970. There were no children in this union. He then married his third wife, Janus Adams. They had twin daughters called Ayodele and Dara. He is survived by four grandchildren. These are Kyle Maxwell, Kadar Elijah, Maxe Samiko and Skye Sophia.

All the three marriages ended up in divorces.

Maxwell Roach battled with ill health in his late life. He suffered a neurological disorder that kept him from the public. In August 2007, Maxwell Roach passed on in Manhattan on August 16, 2007. His remains were buried in the Bronx. An estimated 1,900 people attended his funeral service in Manhattan. Many people paid tribute to him. The Governor of New York, David Peterson eulogized him. He compared him with other black icons like Malcolm X, Harriet Tubman, and Martin Luther King Jr.

Max Roach started out as a traditional drummer. He approached music with an open mind. His blend of music integrated all kinds of available genres. Max Roach never shied to experiment with new styles. This approach made him the most sought jazz drummer in the US. He used his ability to help upcoming musicians. Roach was a great musician, leader, inventor and teacher. He was a man of immense courage. His blend of bebop jazz music has survived to this day.