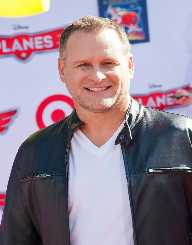 Dave Coulier was a stand-up comedian long before he became a household name.  The Full House actor

Dave Coulier was born on September 21, 1959, in St. Clair Shores, Michigan.  Dave Coulier is one of five children.  His impression routines started early in his life.

His parents, as well as his school administrations, were not pleased with his mischief and distractions.  Dave Coulier is an avid hockey fan and even played varsity hockey in high school.

Dave Coulier went to Notre Dame High School in Harper Woods, Michigan.  It was an all-boys Catholic school.  After doing impressions of teachers and his principal over the PA system, Dave Coulier and another friend in comedy were given the task of writing and presenting comedy skits with each morning announcements.  Before long they were writing sketches for their sister school for girls.

In 1979, Dave Coulier moved to Los Angeles to bring his comedy act to a larger audience.  Dave Coulier started his career as a voice-over actor with Hanna Barbera Studios.

Dave Coulier got his start as a voice actor, but he also pursued character roles on various television shows.  His first starring role in a television show was in the short-lived Nickelodeon comedy Out of Control from 1984-1985.  This is where Dave Coulier started using his catchphrase “cut it out.”

His most notable role as an actor was in 1987 as Joey Gladstone of Full House.  Dave Coulier played a comedian who went to live with his best friend recently widowed and raising three daughters.

When the show was canceled in 1995, Dave Coulier went back to small roles and voice acting.  As reality shows gained in popularity, Dave Coulier was cast in shows like The Surreal Life and Skating With Celebrities.  When the spin-off of his early show returned in 2016, Dave Coulier came back to Fuller House as Joey Gladstone.

Stand-up comedy was still part of his career life.  Dave Coulier founded The Clean Guys of Comedy, an organization that promotes humor that is appropriate for families.

In 1990 he married Jayne.  Together they had a son but divorced after two years of marriage.  Dave Coulier dated the singer, Alanis Morissette.  In 2014, he married Los Angeles photographer Melissa Bring after dating for nine years.

Dave Coulier is a supporter of the Aircraft Owners and Pilots Association.  It is an advocate for general aviation and safe flying practices.

Hockey has been Coulier's favorite sport throughout his life.  Dave Coulier continues to play for fun and celebrity games.  Dave Coulier is also a licensed pilot.  He flies a Beechcraft B35.