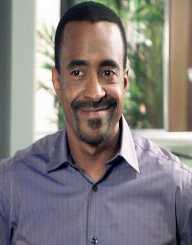 Brilliant in a Quiet Kind of Way: Tim Meadows

American actor and comedian Timothy Meadows was born on February 5, 1961, in Highland Park, Michigan, United States of America. His father, Lathon Meadows was a janitor and his mother Mardell was a nurse’s assistant. Tim was the youngest of the five children of his parents. He spent his childhood watching comic icons like Bill Cosby and Richard Pryor in Detroit where his family got relocated soon after his birth. The late 1960s was a tumultuous era. There was a growing voice of opposition to the war in Vietnam with the streets full of protesters and riots breaking out at the drop of a hat. Tim’s family had to struggle with their day to day existence and often had to depend on the Govt. welfare schemes for their very survival.

Comedy and theater was the only refuge, young Timothy Meadows could indulge in during those difficult times, and he tried to escape from the drudgeries of the hard reality around him by immersing himself into the entertainment mediums like television, etc. He attended the Pershing High School in Detroit and graduated from there. During his high school days, he worked in a liquor store in the evening hours and observed the late night customers asking for Courvoisier. Later on, he developed a character called Leon Phelps taking a cue from these late-night Courvoisier-drinking people in his talk show titled ‘The Ladies man.’ He studied radio and television broadcasting at the Wayne State University, Detroit, Michigan.

Tim Meadows initially started performing improvisational comedy at the Soup Kitchen Saloon. He moved to Chicago in 1986 and found work with Second City, a prime improvisational comedy troupe. There he met future star comedian and fellow actor Chris Farley and formed a good friendship with him. He spent five years working with Second City and developed a devoted fan following around him.

In 1991, Lorne Michaels, producer of the most famous American television comedy show Saturday Night Live added Timothy Meadows in the cast. Chris Farley also joined the cast of the show before Tim’s joining. Tim eventually set a record for the longest tenure on the show serving it for ten seasons until 2000. For most of his years at SNL, he was the only African American in the cast. Darrell Hammond later broke his record of longest tenure as a cast member at SNL in 2005.

During his ten seasons at SNL, Timothy Meadows played various characters and never allowed himself to become a typecast. In addition to his most famous character Leon Phelps, he played Lionel Osbourne, host of the public affairs show “Perspectives,” DJ Chris “Champagne” Garnet, host of ‘The Quiet Storm’ and many other memorable characters. Besides, he mimicked famous personalities like Michael Jackson, Oprah Winfrey, Johnny Cochran and Don King, etc.

In 2000, Timothy Meadows left SNL and starred in the 2000 film ‘The Ladies Man’. His most popular character of Leon Phelps portrayed at SNL, was adapted into this film. He also signed for a supporting role in the television show ‘The Michael Richards Show.’ The show was later canceled, and critics felt that the naughty humor of Leon Phelps was better suited for the small screen. ‘The Ladies Man’ did not receive as many favorable reviews as was expected.

Timothy Meadows has an enviable resume in respect of appearing in television shows also. Apart from ‘Saturday Night Live,’ he appeared in numerous television shows to date. He also lent his voice in the animated comedy series Bob’s Burgers.

Tim Meadows married girlfriend Michelle Taylor on July 20, 1997. However, due to some serious problem in their lives, they went through the process of divorce in 2005. The couple was blessed with two sons, Julian Meadows and Isaiah Crosby Meadows.

Tim is a keen enthusiast of social media having his account on Twitter and Instagram. He is quite active on both these media having more than 6000 followers on Twitter and more than 1300 tweets of his own. He is a trendy man, and according to his former SNL cast member Dana Carvey, he is the nicest guy in show business.