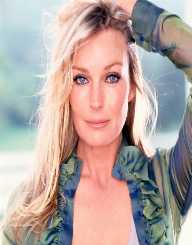 Mary Cathleen Collins known in the industry as Bo Dereck was born an American model, television and film actress and film producer. Born on November 20, 1956, she is known for her role in the film 10 in 1979. She became very popular with the role, and her performance earned her Golden Globe Award for Best New Star nomination. A poster of her in a swimsuit launched with the film also became a bestseller. Her next film Tarzan, the Ape Man, 1981 won her a Golden Raspberry Award for Worst Actress in 1982.

Other films like Bolero, 1984 and Ghost Can’t Do It, 1989, also received bad reviews and earned her Golden Raspberry Award for Worst Actress in Ghosts Can't Do It. In 2000, Derek received a nomination for Golden Raspberry Award for Worst Actress of the Century for films like Tarzan, the Ape Man, Bolero, and GhostsCan't Do It. Throughout the 1980s, she became a known sex symbol in the industry.

Bo Derek (was born on November 20, 1956, in Long Beach, California to Paul Collins and Norma. His father was a Hobie Cat executive and his mother a make-up artist and hairdresser. After the divorce of her parents, her mother married Bobby Bass, an American stunt performer. He received education at Narbonne High School and later at Georges S. Patton Continuation School in Harbor City, California. She dropped out of high school.

In an interview on Late Night with David Letterman in 1985, she said, "I was 16 when I quit high school. I didn't really mean to quit. I spent about a month going to the beach surfing and sunbathing while I was supposed to be in school: when I got caught, my mom was furious. I started to go back to school, and I was really enjoying it, and then I went to go do this film with John in Greece..."

After dropping out of school, Bo Dereck moved with her lover John Derek to Germany. That was where she started her acting career by starring in the low budget film Fantasies, produced by John Derek in 1973. The film was released in 1981 and received negative reviews. After they married in 1976, Derek helped Collins change her physical appearance to give her a Hollywood appeal. Bo Dereck bleached her hair blonde adopted the new name, Bo Derek.

In 1977, she played a minor role in the horror film Orca-The Killer Whale. Two years later, he gained a breakthrough role in the romantic comedy film 10 in 1979 starring Dudley Moore. The film became commercially successful and threw Derek into the limelight.

Her role and a swimsuit outfit she wore in the film will launch her into the status of a sex symbol in the industry. After 10, she starred in the dramatic-comedy film “A Change of Seasons,” 1980. She played the role of a student dating her professor who was married and much older. Derek’s performance received negative reviews and the film had moderate success.

Her first major role in mainstream Hollywood was playing Jane Parker in “Tarzan, the Ape Man” in 1981. The film focused much on Derek’s physical qualities and beauty, mostly appearing in revealing clothes and full of nude scenes. The film was a boxing office success grossing over $35 million in ticket sales. It, however, received negative reviews from critics. Bo Dereck received Golden Raspberry Award for Worst Actress for her role.

She continued with a role in Bolero, 1984, which also received negative reviews and became X-rated due to its sexual nature. She ones again received Golden Raspberry Award for Worst Actress for the role. The film itself, the film received Worst Picture, Worst Director (John Derek), Worst Screenplay (John Derek), Worst New Star, and Worst Musical Score. Her husband John Derek directed all the three mentioned films.

Bo Dereck went into acting hiatus after the role in Bolero. On her return, she starred in Ghosts Can’t Do It, directed by John Derek. The film was a huge flop both commercially and critically. For the third time, Bo Dereck won the Golden Raspberry Award for Worst Actress. The film also received Golden Raspberry Award for Worst Director (John Derek), Worst Supporting Actor, (Donald Trump) and Worst Picture. Bo Dereck also featured in Hot Chocolate (1992) and Shattered Image (1994), Woman Desire (1994), and Tommy Boy. Others include Frozen with Fear, 2000, The Master of Disguise, 2002, Malibu’s Most Wanted, 2003 and Sharknado 3: Oh Hell No! in 2015.

Bo Dereck dated John Derek who was 30 years her senior while in high school. John was at the time married to actress Linda Evans. In order to avoid prosecution of rape under the laws of California since Collins was underaged, the two moved to Germany to pursue their romantic affair. The couple returned to the United States during Collin’s 18th birthday.

In 1976, they married and remained together until the death of John in 1998. The widow Bo has since 2002 being romantically involved with actor John Corbett. Bo Dereck is an avid horse rider and owns Andalusian horses. She published an autobiography Riding Lessons: Everything That Matters in Life I Learned from Horses on February 5, 2002.