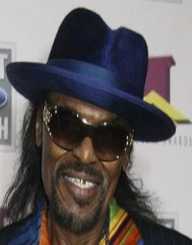 American Chuck Brown, the creator of Go-Go music, was born Charles Louis Brown on the 22 August 1936 in Gaston, North Carolina to Albert Moody, a US marine and his wife Lyla Louise Brown, who worked as a housekeeper.

He had an absentee father who was not involved in his life and Brown was raised in poverty. By age 15, he was living on the streets of Washington.

Because of his family circumstances, Chuck Brown did not graduate from high school.

During the 1950s, Chuck Brown spent eight years in Lorton Correctional Complex because of a murder conviction. He insisted that it was self-defense. While in prison, he exchanged cigarettes for a guitar and began teaching himself to play. After his release from prison, Brown did a series of jobs in Washington, D.C. including truck driving and working in boxing gyms.

Initially Chuck Brown was in Jerry Butler and the Earls of Rhythm (1964) and then joined Los Latinos (1965). Then in 1966, Brown formed the Soul Searchers.

During the 1960s, Brown was influenced by James Brown and other blues, jazz, gospel and soul artists. He began developing his style using African rhythms.

His first album was with his band, The Soul Searchers. Their debut album was We the People (1972) and the title song became his Brown’s first hit.

They then released the album Salt of the Earth which contained the hit Blow Your Whistle. In 1979, his band, now renamed Chuck Brown and the Soul Searchers, had a number one Billboard hit with Bustin Loose which spent four weeks on top of the R&B singles chart.

During the 1980s, Chuck Brown had hits with We Need Some Money, Go-Go Wing, and Run Joe. His music influenced the young rappers emerging from Washington, DC including Trouble Funk and Experience Unlimited. Brown continued experimenting with jazz and created the Go Go Swing Medley playing the jazz classics by Duke Ellington, James Moody, and Johnny Mercer.

In 1985, Chuck Brown and the Soul Searchers appeared at Holland’s North Seas Jazz Festival. Artists such as Grace Jones and Kurtis Blow began incorporating the Chuck Brown sound. Brown continued performing in the US, Europe, and Japan during the 1990s, and he also released live recordings.

He recorded The Other Side with Eva Cassidy. He released Your Game...Live at the 9.30 Club in 2001 and the album was voted a top 10 album of 2001 by Billboard. A live DVD was met with similar acclaim.

Chuck Brown was awarded a Lifetime Heritage Fellowship by the National Endowment for the Arts committee in 2006 and the same year he performed at the Rock and Roll Hall of Fame. He was also honored by the National Visionary Leadership Project which in 2007, recognized his contributions to American history. A street in Washington D.C. has been renamed Chuck Brown Way.