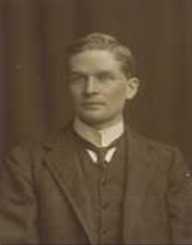 Frederick Soddy was born on the 2 September 1877 in Eastbourne, Sussex, England to Benjamin, a London merchant, and Hannah Green. He had three older brothers.

Frederick Soddy was a pupil at Eastbourne College. He then enrolled at the University College of Wales, Aberystwyth where he studied the classics. He was awarded a science scholarship to Merton College, Oxford in 1885 and graduated with a first class honors degree in chemistry in 1898.

After graduation, Frederick Soddy spent a further two years conducting research. Then in 1900, he moved to McGill University in Montreal for two years where he worked with Professor Ernest Rutherford on issues relating to problems with radioactivity.

After winning the Nobel Prize in Chemistry in 1921, Frederick Soddy became interested in the economics and the ethics of science.