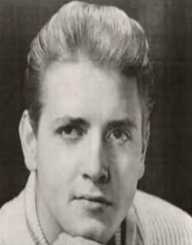 American singer Eddie Cochran was born Ray Edward Cochran on the 3 October 1938 in Albert Lea, Minnesota. He was the son of Frank and Alice Cochran.

Cochran was a pupil at Bell Gardens High School, California but left without graduating.

When Eddie Cochran was in his early teens, his family relocated to California. He had taught himself to play the guitar and formed a band with school friends. Later, he met Hank Cochran, a songwriter and the pair formed a duo, the Cochran Brothers. Frank and Eddie were not related, they only shared the same surname. Apart from performing with the Cochran Brothers duo, Cochran was also beginning to compose songs. Crest Records released Cochran’s first solo single Skinny Jim in 1956.

Eddie Cochran was asked to perform in the film, The Girl Can’t Help It (1956) starring Jayne Mansfield, and he had a hit with Twenty Flight Rock, which was co-written with Ned Fairchild.  He was also in Untamed Youth (1957), performing Sittin’ in the Balcony which he co-wrote with John D. Loudermilk. Liberty Records released Cochran's only studio album, Singin' to My Baby (1957).

He wrote the classic Summertime Blues (1957) with Jerry Capehart which charted at No.8. Other hits include C’mon Everybody, Somethin’ Else, Teenage Heaven and Three Steps to Heaven. Cochran toured the United Kingdom in 1960, and George Harrison later wrote that he had been a member of the audience at one of his shows. The tour had been so successful, that ticket demands meant that the trip was extended by ten weeks.

In 1960, Eddie Cochran was in a motor accident in England. He suffered severe head injuries and died in hospital in Bath, England on the 18 April 1960. He was in a taxi taking him from a show in Bristol, England to Heathrow airport in London so he could catch his flight back home to the United States.

At the time of his death, Cochran was engaged to songwriter Sharon Seeley who was in the taxi with him when it crashed. Seeley survived the crash without serious injury. Singer Gene Vincent was also in the vehicle and suffered a limp for the rest of his life due to a leg injury he sustained in the accident.

Eddie Cochran's music had an impact on John Lennon, Paul McCartney, George Harrison, Jimmy Hendrix and many others who have spoken or written about his influence on their music.