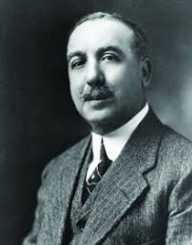 Edwin Stanton Porter was born on April 21, 1870, in Connellsville, Pennsylvania. He was an American filmmaker who invented the Simplex camera for Edison Company. He pioneered some of the earlier film techniques which were implemented in films such as ‘The Great Train Robbery.’

Edwin Stanton Porter was born on April 21, 1870, to a merchant Thomas Richard Porter and Mary Porter. He was born in Connellsville, Pennsylvania as the fourth child in a family of seven children. At birth, his parents named him Edward, but he changed his name to Edwin Stanton.

He renamed himself after Abraham’s Lincoln Secretary of War Edwin Stanton who was also a Democratic politician. He attended public schools in Connellsville but dropped out of school at the age of fourteen.

Edwin S. Porter started doing several low paying odd jobs such as painting, theatre cashier and an exhibition skater. He became fascinated with electricity from a young age and desired to become an electrician. He conducted several experiments with electricity and telegraphs. In the early 1890s, he became a significant contributor to the development of Bradley A. Fiske’s electronic rangefinder (RF).

On June 19, 1893, Edwin S. Porter joined the United States Army where he served for three years until 1896. After his discharge from service, he returned home and started working for Raff & Gammon in New York in 1896.

The company acted as agents of viewing equipment and films that were made by Thomas Edison. He left Raff & Gammon to work for Kuhn & Webster’s Projectorscope as a projectionist. He made several tours as an employee in several countries including Canada and the United States.

In 1898, he returned to New York and picked up a job at the Eden Musee in Manhattan. His role at Musee was to conduct programs for Edison’s films, especially showcasing the films of the Spanish-American war.

In 1899, Edwin S. Porter became an employee at Edison Manufacturing Company. He later became in charge of the motion picture production based at Edison’s New York Studios. His major roles were directing actors, operating the cameras and working on the final film prints. His time at Edison saw him collaborate with different filmmakers including George S. Fleming.

By the 1900s, he had made a name for himself and had become the most talented filmmaker in American history. He made several films for Edison including ‘The Grizzly King’ and ‘Terrible Teddy’ both of which were created in 1901.

The two films were among his first works at Edison. The other films that followed included ‘Jack and the Beanstalk’ (1902), and ‘Life of an American Fireman’ (1903). In these latter films, he used borrowed ideas from other filmmakers but focused on improving the concepts rather than just pasting the whole thing in his works.

While still an employee at Edison, Edwin S. Porter produced one of his best works in 1903 known as ‘The Great Train Robbery.’ The film elevated him to a level of widespread acclaim and became his breakthrough.

The film incorporated several techniques most of which startled the audience. It's uniqueness rooted in the idea of showing narrative progress with the beginning of every action scene.

The other unique technique which he used was capturing bandits firing gunshots aimed at the camera. With such an impressive creation, he was permitted by Edison to start creating his one-reel films. After ‘The Great Train Robbery’ he created ‘The Kleptomaniac’ in 1905. Other films that followed shortly after included ‘Dreams of a Rarebit Fiend’ (1906) and ‘Rescued from an Eagle’s Nest’ (1908).

Starting His Own Company

In 1909, Edwin S. Porter left Edison to begin his own filmmaking company taking full charge as producer and managing his equipment. He founded his private company known as Defender Film Company in 1910 which collapsed abruptly in 1911. In 1911, he collaborated with friends to form the Rex Motion Picture Company. He sold the rest of the shares of the company in 1912 and took up a job at Famous Players Film Company.

This was the first film company in America that produced feature-length films on a regular basis. He became the director of actor James K. Hackett in the company’s first feature length film ‘The Prisoner of Zenda’ in 1913. He also directed other actors and actresses including Mary Pickford in ‘Good Little Devil’ (1913), John Barrymore and Pauline Frederick.

With advanced knowledge and skills in different film techniques, Edwin S. Porter explored the 3D style in his 1915 film ‘Niagara Falls.’ In 1916, he left Famous Players and started his own film company known as Precision Machine Company. In 1917 he began serving as the company’s president which manufactured Simplex projectors. He retired in 1925 but was still active as an inventor and designer dealing in projector devices and still cameras.

Edwin S. Porter married Caroline Ringer on June 5, 1893, and lived without having children. He died on April 30, 1941, in New York City at the Hotel Taft. He died at the age of seventy-one. His remains are buried in Husband Cemetery, Somerset, Pennsylvania.