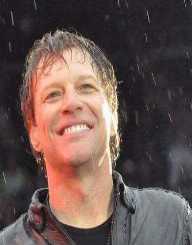 John Francis Bongiovi, Jr. was born on March 2, 1962, in Perth Amboy, New Jersey. His father was a former Marines barber, and his mother was a Playboy Bunny, who later became a florist. He has two brothers, and the family was Catholic. Bon Jovi attended the St. Joseph High School in New Jersey, and later transferred to Sayreville War Memorial High School.

Bon Jovi was interested in music from an early age. He often skipped school to attend to his music activities. Bon Jovi played in local bands during his adolescence, together with some friends and his cousin Tony Bongiovi. Tony owned a famous New York City recording studio The Power Station. He began playing in clubs when he was 16 years old. However, his grades suffered severely. He was playing in a band called Atlantic City Expressway, and also The Rest, The Lechers and John Bongiovi and the Wild Ones. When Bon Jovi turned 17, he began working at his cousin's recording studio sweeping floors. In 1980, he was offered to record the song R2-D2 We Wish You A Merry Christmas. In 1983, he briefly joined the band Scandal and appeared in the band’s music video for the single Love’s Got A Line On You.

In 1982, Bon Jovi recorded his first song “Runaway”, together with guitarist Tim Pierce, drummer Frankie LARocka, bass played Hugh McDonald and keyboardist Roy Bittan. With his demo record, Bon Jovi went to several companies, like Atlantic Records and Mercury, but was turned down. He then visited the rock radio station WAPP “The Apple” in New York, and the promotion director of the station John Lassman accepted his song. He included the song in the local homegrown talent compilation, and soon the song became a local hit. In 1983, Mercury Records signed Bon Jovi. He changed the group’s name to Bon Jovi, and the band released its first album in 1984. Bon Jovi’s big break came in the end of 1980s, when his band released the album Slippery When Wet.

After the group earned widespread popularity, Bon Jovi was asked to assist on Cher’s self-titled album in 1987. He co-wrote several songs on the album and later went on to co-produce her multi-platinum album Heart of Stone. He also worked together with Alice Cooper. In 1987, Bon Jovi embarked on the Slippery When Wet Tour. Due to the busy schedule and his dedication to the show, he injured his vocal cords and began receiving steroids. He hired a vocal coach and was able to continue the tour. Despite the massive success of the tour, it put a lot of strain on the band members, who were all physically and emotionally exhausted. After the New Jersey Tour, which included 232 shows and ended in 1990, they disbanded.

In 1990, Bon Jovi was approached by Emilio Estevez, who wanted him to lend the song “Wanted Dead Or Alive” for his upcoming sequel to Billy The Kid. Instead, he composed a completely new soundtrack and delivered his first solo album. Bon Jovi also recorded the soundtrack for Young Guns II. His first album also included collaborations with stars like Elton John and Little Richard. Album’s first single “Blaze of Glory” quickly reached No.1 on the Billboard Hot. “Blaze of Glory” became a major hit, and in 1991, won the American Music Award for Favorite Pop/Rock Single. It also earned Bon Jovi his first Golden Globe award, as well as nominations for Academy Award and a Grammy

Bon Jovi started his label Jambco Records in 1991. His first work under the new label was the production of album Blood on the Bricks by Aldo Nova. It was followed by Billy Falcon’s album Pretty Blue World. Despite his success, Bon Jovi was struggling with his personal life and felt unhappy. He decided to embark on a two-week motorcycle trip, which benefited both his mood and creativity.

After returning from his trip, Bon Jovi fired his manager Doc McGhee, his business advisers, and agents, and created Bon Jovi Management. He resolved the issues with his old band and put them back together. In 1992, Bon Jovi released the album Keep the Faith. The new album was a step away from the conventional rock and brought the listeners a more mature sound. Bon Jovi also cut his trademark long hair, which draws a lot of media attention, even making headlines on CNN.

In 1997, a second solo album Destination Anywhere was released. Just shortly after, a short movie based on the songs of the album was also released. The movie starred Bon Jovi himself, Demi Moore, Kevin Bacon and Whoopi Goldberg. Bon Jovi’s band returned with a new record Crush in 2000. The lead single of the album, “It’s My Life” became a major hit and brought the band a new, much younger audience. In 2012, Bon Jovi became the author of the soundtrack for Stand Up Guys movie, and the song is Not Running Anymore was nominated for a Golden Globe Award.

Besides his musical career, Bon Jovi has also appeared in several movies as a credited actor, for example, Moonlight and Valentino, The Leading Man, Little City, and National Lampoon’s Pucked. One of his biggest roles was in the movie Pay It Forward, where he starred alongside Helen Hunt, portraying her abusive ex-husband. Bon Jovi has also made several television appearances in shows like Sex and the City, 30 Rock, The West Wing.

Bon Jovi has also worked on several charities. He has participated in activities by the American Red Cross, Elizabeth Glaser Pediatric AIDS Foundation, Covenant House, Project H.O.M.E. He also helped to establish the Jon Bon Jovi Soul Foundation. Since 2005, Bon Jovi has been working to raise awareness about Habitat for Humanity project and became the organization's first founding ambassador. In 2006, he donated $1 million to build 28 Habitat homes in Louisiana.

In 1989, Bon Jovi married his high school sweetheart Dorothea Hurley in a secret trip to Las Vegas. The couple had four children- a daughter and three sons.

In 2004, Bon Jovi founded the Philadelphia Soul football team of the Arena Football League. However, he is no longer a partial owner of the team. In 2015, he purchased 15% off Atlanta Falcons for 150 million dollars.