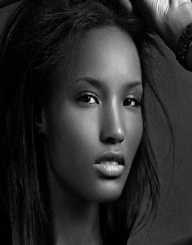 Fatima Siad was born on December 17, 1986. She is a Somali American fashion model. She was born in Somalia but raised in Boston, Massachusetts. She was placed third in ‘America’s Next Top Model.’ She has gained popularity because of her beauty, poise, and courage that she showed during her childhood. She went through a lot of hardships before she could make it in the modeling industry. As a child, she went through female genital mutilation which she discourages to date as it is not a good experience. Her siblings were killed in the Civil War in Somalia while she was a child and she was left all alone with her mother. They migrated to the United States for a better life.

Fatima Siad was born on December 17, 1986, in Mogadishu, Somalia. She was born to an Ethiopian father and a Somali mother. His parents divorced while she was still young and her mother was left as a single mother taking care of her and her siblings. She had two siblings. She went through female circumcision when she was seven. Her siblings were killed by the army during the Somali Civil War. She was therefore left alone with her mother. She went through a lot of trauma while she was young. Firstly, the fact that her genitals had been mutilated and secondly, the experiences of the civil war and her losing her siblings in the war.

Fatima Siad grew up with low self esteem and confidence. Her mother flew to the United States so as to provide a future for Fatima. They immigrated to the United States when Fatima was thirteen. She had a difficult time adjusting in the United States but she later on made friends and became a bit secure. She attended high school in Boston, Massachusetts and after graduating High School, she went to Spelman College. In 2004, she enrolled at the Bryn Mawr College. She was skinny and tall but she had no passion of pursuing a modeling career. She later enrolled at the New York University where she took pre-med and political science. She went back to Bryn Mawr College to finish her education.

While she was in college, Fatima Siad was advised to join modeling as she had a skinny body, she was tall and her poise was awesome. The idea of becoming a model had never crossed her mind as she was so focused on her studies. She was a beautiful girl and her friends pushed her to start putting on fashionable clothes. This she did and she started developing confidence in her beauty.

In 2008, she auditioned for the reality TV show ‘America’s Next Top Model’. She cleared the audition and was chosen as a candidate. She dropped out of college so as to give her all to the show. She was afraid of how her mother was going to react but her mother was supportive all the way. She did well in the competition as she won the challenge in which she received fifty extra frames. She once lost her travelling documents while in the competition so she missed a photo shoot but she progressed further into the competition even with the challenges that faced her.

Fatima Siad confessed to having been circumcised while she was young in the competition. She gained sympathy from the public and her popularity with media outlets increased. She was placed third on the show and that is when she launched her career. As a model, she had a lot of confidence, beauty and grace. She is currently signed with IMG Models in New York City, Paris, Milan and London. She is also signed with Ace Models in Athens, Greece. She has featured in magazines such as ‘Look Magazine’, ‘CosmoGirl’ and ‘Ebony Magazine’ among others. She has also done ad campaigns with Armani Exchange and Doncaster’s Winter 2013 Collection.

Fatima Siad is one of the people who has achieved a lot in her life. She came from being a poor and traumatized young lady to a popular fashion model. She has developed to become a beautiful, courageous and confident young lady. She is an inspiration to many youths and young girls. Her mother is her greatest fan. She speaks openly and condemns Female Genital Mutilation.