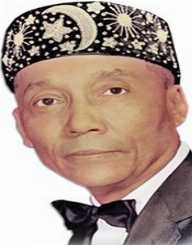 Elijah Muhammad was born on October 7th, in 1897. He is a notable black religious figure. He is remembered for having acted as the Nation of Islam (NOI) leader. Similarly, he was a religious mentor to the likes of Muhammad Ali, Louis Farrakhan and Malcolm X.

Elijah Muhammad was born Elijah Robert Poole on October 7th, in 1897. His place of birth was in Sandersville in Georgia. He was the seventh born child to William Poole Sr. His father was a religious leader. Elijah’s mother was called Mariah Hall.

Growing up, Elijah did not get an adequate education for it ended when he was only in his third grade. After that, he went on to work in brickyards and sawmills. He was from a low-income family and therefore he was obliged to join his family in sharecropping. Elijah later left his home place to go and work in factories.

In 1931, Elijah Muhammad crossed paths with Wallace D. Fard while he listened to his Islamic preaching and the empowerment speeches that he has to the black community. Seeing that Fard’s teachings were of great inspiration to him, Elijah became an avid follower. It did not take time before he fully converted and became a Muslim. Fard, bestowed him with the name Muhammad.

Following the disappearance of Fard in 1934, NOI became segregated forming different groups with different leaders. Muhammad was one of the leaders of his group. He successfully guided his group to move to Chicago. It is from this location that he became a massive influence to NOI that he was leading.

Elijah Muhammad avoided the World War II draft which led to his arrest in 1942. Later, he was released on bail. However, he was quickly arrested again this time he was imprisoned for four years at the Federal Correctional Institution situated in Michigan. While in prison, Muhammad’s wife alongside his trusted followers guided the NOI. Often, he would send messages to the group using letters.

Upon his release from prison in 1946, Elijah Muhammad took over again as the leader of the Nation of Islam. The group gained more followers due to his renewed efforts in getting more members to join. By 1955, the group had about fifteen temples and by 1959 NOI had about 50 temples across 22 states.

Elijah Muhammad wedded Clara Evans in 1917. Together, the two welcomed eight children in their marriage.

Elijah Muhammad breathed last on February 25th, in 1975 following congestive heart failure. He left behind a considerable trail of followers with about 250, 000 people being members of NOI. One of his sons named Warith Deen Mohammed succeeded him as the leader of the group.