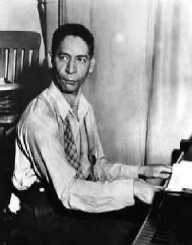 Ferdinand Joseph LaMothe popularly known as Jelly Roll Morton was an American Jazz pianist, composer, and bandleader. Born on October 20, 1890, he was very instrumental in early jazz and regarded its first arranger. Morton usually claimed to be the inventor of jazz of which jazz historian and composer, Gunther Schuller agrees with. Morton released his debut composition Jelly Roll Blues In 1915, which became the first published jazz composition.

His standard works include Wolverine Blues; I Thought I Heard Buddy Bolden Say, King Porter Stomp, and Black Bottom Stomp. Morton was perceived to be very arrogant, and that left him in his own world with other colleagues not associating with him.

Jelly Roll Morton was born on October 20, 1890, in the Creole community of New, Orleans, Louisiana. His exact date of birth is uncertain because he was not issued a birth certificate. This was a common practice in New Orleans until birth certificate became a requirement for citizenship in 1914. He was born to Edward Joseph Lamothe and Louise Hermance Monette.

Edward worked as a bricklayer and Louise a domestic worker. Morton’s parents broke up when he was three year, so his mother later married William Mouton in 1894. He displayed great musical talent growing up and despite going through depression at a point, was able to pick up.

Jelly Roll Morton worked in a brothel as a piano player when he was fourteen. Due to the environment, he found himself; most of his lyrics were smutty. This was when he picked up the nickname, Jelly Roll. Morton did not want his great-grandmother he was living with to find out he worked in a brothel. He, therefore, managed to convince her that he worked in a barrel factory as a night watchman. However, she later found out and kicked Morton from the house.

He started a musical tour in the American South around 1904, playing in shows like Will Benbow’s Chocolate Drop. During this period, he composed works like Jelly Rolls Blues, King Porter Stomp, New Orleans Blues, Animule Dance, and Frog-I-More Rag. In 1910, he played in Chicago and moved to New York City in 1911, gaining the attention of the likes of James P. Johnson and Willie “The Lion” Smith. Jelly R. Morton started penning down his compositions around 1914. A year later in 1915, he published his first composition, Jelly Roll Blues. It is regarded as the first-ever-published jazz composition. He also toured at most parts of the country earning money through music. He was also into gambling and made money out of it.

Band And other Recordings

Jelly Roll Morton signed a contract with Victor Talking Machine Company in 1926, to for his recordings. He came up with the band Jelly Roll Morton & His Red Hot Peppers for his recordings in the Victor's Chicago recording studios. Other members of the band were Kid Ory, Johnny St. Cyr, Andrew Hilaire, Omer Simeon, Barney Bigard, George Mitchell, Johnny Dodds and Baby Dodds. The band became famous by dropping hits like "Black Bottom Stomp" and "Smoke-House Blues."

This period was also the peak of Morton’s career. He later moved to New York City, but Morton remained committed to recording for Victor Talking Machine Company. In 1931, his contract with Victor ended and was not renewed party due to the near collapse of the record industry resulting from the Great Depression. His career in New York was not successful and had financial problems. He later moved to Washington, D.C. in 1935 to manage a club, Music Box and added as a piano player for the club. He tried to revive his career but was unsuccessful until his death.

In 1938, while working at Music Box, a friend to the owner of the club stabbed Morton. Jelly R. Morton sustained injuries to the chest and head. Complication of these injuries would later cause his life. After the incident, a nearby hospital refused him admission because it was white-only.

Jelly R. Morton has therefore transported to a black hospital miles away. It took several hours before doctors attended to him. With a poor treatment and recovery, he developed a complication by often having shortness of breath and other respiratory problems. He later developed asthma and at a point was admitted in a hospital in New York for three months. In 1941, he was admitted at the Los Angeles County General Hospital where he died on July 10, 1941, after spending eleven days there.

Jelly Roll Morton had some relationships before settling down. He dated Rosa Brown, who he toured with during the early stage of his career. He married a showgirl, Mabel Bertrand in November 1928.

Jelly Roll Morton has been honored with a Grammy Lifetime Achievement Award in 2005. In 1998, he was inducted into the Rock and Roll Hall of Fame.