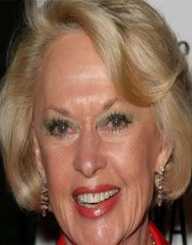 Tippi Hedren was born to the couple Bernard Carl and Dorothea Henrietta (nee Eckhardt) Hedren on January 19, 1930. She was born in New Ulm, Minnesota. Hedren’s grandparents were refugees from Sweden, and her maternal lineage was from Germany and Norway. Bernard Carl owned a general shop in Lafayette, Minnesota. He called Hedren “Tippi.”The family shifted to Minneapolis when Hedren was four.

Hedren took part in the fashion shows of the departmental stores. The family shifted to California when Hedren was studying in high school. Hedren joined Eileen Ford Agency in New York on her 20th birthday. She made an appearance in a musical comedy, The Petty Girl. She in her early days was not keen on acting in films as she thought she might not make a successful career. More so, she was having a successful modeling career in the fifties and sixties performing on the front page of Life, The Saturday Evening Post, McCall’s and Glamour.

Tippi Hedren along with her daughter, Melanie Griffith, relocated to California in 1961 with the hope of pursuing her profession. But, things were not smooth for her.

She came in contact with Alfred Hitchcock in 1961. Hedren was asked to appear in a leading role in the under-production film, The Birds. The Birds was the first film on the screen. Hedren featured as Melanie Daniels. Her experience in the final episode of birds attack was worse as she recollected later.

The film was shown in the 1963 Cannes Film Festival. There were many accolades in the review. She was awarded the Golden Globe Award for New Star of the Year. Her performance as Melanie Daniels is regarded as the best movie character.

Tippi Hedren was offered a leading role in the film, Marnie in 1964. This film was the preferred one of the two films she did with Alfred Hitchcock. The reviews were very good. Hedren’s relation with Hitchcock was not that pleasant. Hitchcock was obsessed with her.

In 2012, Hedren featured in The Girl. This film is based on Hitchcock’s behavior with Hedren. There were views for and against the film. Hedren’s next film was in A Countess from Hong Kong featuring Marlon Brando and Sophia Loren.

Other awards include Woman of Vision Award from Women of Film and Video in Washington, DC, Presidential Medal for her work in film from Hofstra University, Humanitarian Award at Las Vegas International Film Festival.

Tippi Hedren married Peter Griffith in 1952. She had a daughter, Melanie Griffith through this marriage. Melanie Griffith was born on August 9, 1957. She also chose acting as her career. Hedren divorced her husband in 1961.

She helped the progress of nail barbershops in the USA. She helped many women in learning the art of manicured nails, by employing her manicurist to teach them the ins and out of the trade. BCL CND has instituted a scholarship in her honor entitled Tippi Hedren Nail Scholarship starting from 2014.