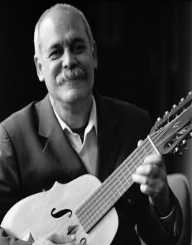 Barbarito Torres is a Cuban musician famous for playing the laud guitar with the Afro-Cuban All Stars.

Barbaro Alberto Torres Delgado was born in 1956 in Matanzas, Cuba. He grew up in a musical era where the Afro-Caribbean music ruled the islands of the Caribbean Sea. He listened to the punto Cubano music, a genre of Latino Cuban country music.

Torres started playing the laud at the age of 10 years. He continued playing the instrument in his high school band. He joined the first band Serenata at the age of 14. He left the band to concentrate on his studies. He later joined the band after his high school graduation. He briefly formed his band called Cuarteto Traditional Mantacero. Torres left the band for service in the military.

After his discharge from the army, he joined the musical formation Grupo Yarabi in his hometown of Matanzas. Torres traveled with the group performing on several tours. Ultimately, he settled in in the capital city Havana. In Havana, he joined the Orchestra Cubana de Cuerdas. With the vast knowledge of various Cuban musical instruments, Torres started doing back up work with prominent musicians like Albita and Sierra Maestra.

As his fame grew, Torres joined the musical group Campoalegre under the leadership of Celina Gonzalez. He became the musical director of the group. While acting as the director of Campoalegre, he worked with another group called Manguare. He did musical tours with both groups for a while. He continued playing with Gonzalez until the fall of 1995.

In 1992, he commenced working on his independent career. He assembled his own band called Piquete Cubano. He never stayed with the band for long. He left the band and started working with two prominent Cuban groups in Havana.

He joined the group Afro Cuban All Stars in Havana. Torres played with the formation recording superior albums. The group was an amorphous formation of top rated Cuban musicians in Havana. It focused on the wider Latino music genre of Central and Southern America.

After several successful tours in Cuba, Torres was included in another musical ensemble called Buena Vista Social Club. This group strived to revive the traditional Cuban music played by the older generations prior to the Fidel Castro revolution. Torres met with musicians of the older generation. He added the youthful touch in the band.

Torres won a number of awards with the two groups. Torres played a monumental role in the recording albums with Buena Vista Social Club. He recorded the album titled Buena Vista Social club in 1999. The group won a Grammy Award for the band. The album sold over 1.5 million copies worldwide during their international tour.

He recorded the next album in 2015 as he charted his solo career. The album was titled The Big Short. Two years later in 2017, he recorded the last album with the group titled Buena Vista Social club: Adios.

In 2000 Torres embarked on a solo career. He released his maiden solo album titled Havana Cafe. In the recording of the album, he assembled a host of prominent musicians. They included Ibrahim Ferrer, Luis Mirabela and Omara Portuondo from the Afro Cuban group. Notably, Portuondo was the sole lady in the band. She was fondly called the grand old lady of Cuban music

Torres became popular for his solo performances playing the Cuban laud guitar. Apart from the Havana Cafe album, Torres recorded three other albums. In 2003 he recorded the self-titled album, Barbarito Torres. The album cemented his fame as the undisputed solo musician in Cuba. He composed the album as a tribute to his hero and legend of Cuban music, the late Arsenio Rodriguez.

In 2016 he recorded the album titled Vamonos pa’l monte. The following year in 2017 he recorded his latest solo album AmeriCuba. In this album, Torres incorporated the fusion of American hip hop artists like Missy Elliot and Jason Derulo.

In a bid to penetrate the international market, he collaborated with well-known American musicians infusing the Cuban beat with the African American hip hop beat.