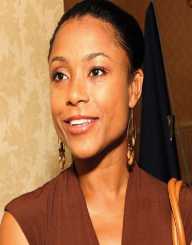 Dominique Dawes known in the gymnast circle as “Awesome Dawesome” is a former American artistic gymnast. Born on November 20, 1976, she was a member of the U.S. national gymnastics team and the 1996 Summer Olympic gold-medal-winning team “Magnificent Seven.”With her ten-year career in gymnastics, she was also a three-time Olympian in 1992, 1996 and 2000, member of the 1994 all-around senior National Champion and a silver and bronze medallist at the World Championship. With her tremendous career, she became the first black person to win an Olympic-gold-medal in gymnastics, and the first African-American woman artistic gymnast to win an individual Olympic medal. She retired from the fame after the 2000 Olympic Games.

Dominique Dawes was born to Don and Loretta Dawes on November 20, 1976, in Silver Spring, Maryland. She is the second child of three with elder sister Danielle Dawes-Thompson, and a younger brother, Dominique Dawes they are both athletes and have participated in the Olympic Games. At the age of six, Dominique Dawes was introduced to gymnastics after her parents enrolled her at Marva Teens, a local gymnastics club. She trained under Kelli Hill who would be her coach throughout her career. Dominique Dawes received education at Montgomery Blair Hair School in Silver Spring and later at the Gaithersburg High School in Gaithersburg, Maryland. While there, she won the prom queen in 1994. She later enrolled at the University of Maryland, College Park graduate with a bachelor degree.

At the age of ten, young Dominique Dawes was already competing as junior elite. In 1988, she made a debut at the junior division of the U.S. National Championship placing 17 in the all-around. The following year, she traveled to Australia for an international debut at the Konica Grand Prix. Her performance improved astronomically with time and began to achieve success in international and national events. During the 1990 U.S. National Championships, she took the third position in the all-around junior division.

Dominique Dawes made it to the 1992 Olympic Games after placing fourth in the United States Olympic team trials to earn a place. She competed favorably during the main event, and the team won bronze in the competition. This made Dawes along with Betty Okino the first African-American female gymnast to win an Olympic medal. Dominique Dawes will go into the 1993 World Championship with a renewed energy. Having an impressive start, she faltered after vault fall and dropped in points placing fourth overall.

Dominique Dawes was able to bounce back to win two silver medals on bars and beam during the event finals. She had a disappointing competition in the 1994 World Championship and ended without a medal. Nonetheless, she was superb in the National Championships placing first in the all-around and all four event finals. That year, she led the American team to Dortmund, Germany for the World Team Championships, where they finished with a win a silver medal.

She continued with the impressive performance at the 1996 U.S. National Championships despite having a difficult season the previous year. For the second time, she sweptsweep all four event finals making her the only gymnast ever to achieve that feat twice. She was able to make it into the U.S. Olympic team for that year’s competition. Dawes performed tremendously at the Olympics adding to her team’s victory of winning Olympic gold. The Team later became known as the “Magnificent Seven.”

Dominique Dawes became the first black woman to achieve that feat. She earned a spot to join the U.S. Olympic team for the 2000 Sydney Olympics. The team won bronze after the International Olympic Committee stripped China stripped China of its medal for fielding an underage member.

After a splendorous and fulfilling gymnastics career, Dominique Dawes is currently pursuing a career in acting, modeling, and television production. In 2006, she appeared in Missy Elliot’s music video "We Run This," and also in Prince "Betcha By Golly Wow" music video. She played the role of cheerleader Patty Simcox in the Broadway revival of the musical, Grease. From 2004 to 2006, she was the President of the Women's Sports Federation. She serves on the on the Advisory Board of Sesame Workshop’s Healthy Habit for Life. During the 2008 Beijing Olympics and the 2010 Winter Olympics, she served as a commentator for Yahoo. President Barack Obama appointed her as co-chair of the President’s Council on Fitness and Nutrition in June 2010.

Dominique Dawes is married to a Catholic School teacher, Jeff Thompson. The two engaged in December 2012 and married on May 25, 2013. The couple welcomed their first daughter in March 2014. She has converted to Catholicism.