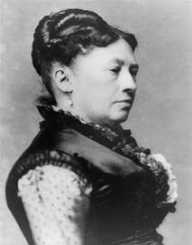 Julia Grant is a former First Lady of the USA and wife of the 18th president of the US, Ulysses Grant.

Julia Grant was born as Julia Boggs Dent on January 26, 1826, on her father’s plantation farm in St Louis, Missouri. She was the daughter of Frederick and Ellen Dent, a wealthy slave-owning couple. Julia was the fifth born in the family of eight children. She commenced her formal education in 1931 at the Gravois School in St. Louis. She moved from the school in 1836. She joined the prestigious Mauro School in 1836. She graduated from the girls’ boarding school in 1843.

She met her future husband Ulysses Grant through her brother Frederick. Frederick and Grant met at the West Point Military Academy as cadets of the US army. In 1844, Grant met Julia while visiting the Dents at their White Haven plantation in Missouri. Grant proposed marriage in April of 1844. Grant moved with his regiment to the battlefront of the US-Mexican war that year. The wedding preparations stalled until he returned in July 1848. Grant formalized his engagement and took leave from his military duties.

Julia wedded Grant in a church ceremony held on August 22, 1848, in St. Louis. Grant’s father protested the family union by staying away from the ceremony. He objected his son marrying from a family of slave owners. On the other hand, Julia got as a wedding gift 80 acres of land. He returned to his military duties after the wedding. Julia raised her first two children fairly alone. Grant spent long military deployments on the western coast of the US. He resigned from the army in 1854 to concentrate on his family duties. He fathered two more children with Julia. His first child Frederick Dent was born in 1850 and followed by Ulysses Simpson in 1852. The only daughter Ellen Wrenshall was born in 1855, and the last born Jesse Root came in 1858.

Without a regular income, Grant gradually slipped into debts. He did several jobs in St Louis before returning to his father. He got employed at the family’s leather company. He cleared his debts and begun providing a healthy life to his family. Once out of debt, Grant moved with his family to Illinois. Julia faced another interruption in her marriage life soon after they relocated to Illinois.

When the American civil war erupted, Grant joined the volunteers to the US army. He organized the recruitment of civilians into the volunteers’ corps of the US army. The US army reinstated him into his rank of Brigadier General. In a while, he became a Major General of the volunteer corps. Julia joined her husband on the battlefront as it was the common practice of the military wives then. She spent the next four years moving with her husband from one battlefield to another. In 1864, Grant became the commander of the US army. He left his wife behind and embarked on mobilizing the army against the southern states. Julia followed him after permission from President Abraham Lincoln.

In 1868, General Ulysses Grant won the US presidential elections. Julia played a pivotal role in the campaigns as she did during the civil war. Julia Grant brought the much-needed energy into the White House. She hosted state dinners for selected guests in the lawns of the White House. With time, she gained the acceptance of the US citizens as a mother figure. Initially, she operated from her family home in the capital, leaving the White House for official functions. After persuasion from her husband and the office staff, she moved her residence to the White House.

She elevated the role of the First Lady by unilaterally creating duties to herself and her staff. She set rules for her staff, and for her guests. Julia demanded respect for the wives of high government officials and foreign diplomats. She argued that the wives were an integral part of their husbands and such required the respect accorded to their high profile spouses.

She used her role as a presidential wife to advocate for the rights of women in the US. Julia was known as a combative lady when it came to the rights of women. She had issues with the doctrine of polygamy propagated by the Mormons church in the US. She had mixed feelings on the issue of slavery. She owned slaves in her youth and as the Frist Lady. She never denounced slavery in her lifetime. Contrary to other slave owners, she tried her best to let her slave workers get an education and own property including land.

Julia accompanied her husband on a world tour after leaving the White House. They returned and settled in New York. They went into debt occasioned by a failed investment in 1884. Grant published a well-received autobiography Personal Memoirs of U.S. Grant and paid off the debt.

Julia Grant died in Washington D.C. on December 14, 1902. She was buried in the family tomb in New York.