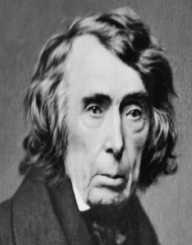 He was the first Roman Catholic ever to head the Supreme Court in the USA. The fifth Chief Justice of the US, he was the most controversial yet astute judge the US has ever had.

Roger Brooke Taney was born on March 17, 1777, in Maryland USA. He was the second son of Michael and Monica Brooke Taney. His family had a long established history of farming and owning slaves. In following to tradition, his elder brother was the heir apparent to the estate. Thus his father encouraged him to study hard to establish himself from the farm.

Taney got his elementary education from a private teacher. He was enrolled at the Dickinson College in 1792, at the age of 15. He graduated with honors in Arts in 1796. He proceeded to study law under Judge Jeremy Chase. He was admitted to the bar three years later in Maryland.

As a young lawyer, Taney distinguished himself as one of the brightest minds in Maryland. His demeanor in court endeared both the bench and fellow counsel. Inside the court, Taney had a share of fame by winning landmark cases. One of those was in 1811. When the US Army Commander in Chief was court-martialled, Taney was the in the defense counsel. He successfully defended General Wilkinson from near possible execution.

His entry into politics was expected. His maverick nature started when he was still in college. In 1800, he was elected a delegate in the Calvert County Legislature. Taney became the youngest delegate at only 23. He was subsequently defeated in the ensuing elections by the Republicans.

In 1816, Taney secured his entry to the Maryland State Senate. He later became the Attorney General of Maryland State in 1827. Taney marshaled his support for the election bid of Democratic presidential candidate Andrew Jackson in the 1828 elections. Following his win, President Jackson nominated him to his cabinet in 1831. He became the US Attorney General. As the legal advisor to the president, Taney spearheaded the collapse of the US Central Bank.

Later that year, Taney was nominated and confirmed by the Senate to the position of Chief Justice in the US Supreme Court. Now the most powerful legal entity in the US, Taney made several landmark rulings. Though an abolitionist to slavery himself, he ruled against the civil rights of African American slaves. Essentially the ruling deprived them any sense of legal redress against any slavery abuses. This was in the case of Dred Scott versus Sandford in February 1857. The case gave the Republican Party politicians a head start in the coming elections. Republican presidential candidate Abraham Lincoln was voted into office on an anti-slavery platform. Taney was the chief Justice who oversaw the swearing in of Abraham Lincoln as the 16th president.

During the American civil war, Taney stood by the US government of President Lincoln. Despite that, he believed that the Confederate states had a right to secede under the law. Again, he opposed President Lincoln’s decree suspending the civil rights of citizens during the war. The decree had given the government the right to detain without trial anyone suspected to be sympathetic to the confederation side.

Taney got married to his wife Anne Key in January 1806. The couple had six daughters. After the death of his wife due to yellow fever in 1855, he relocated to Washington DC.

In private, Taney was anti-slavery. He had freed all of the slaves he inherited from his family.

Roger Taney died on October 12, 1864, in Washington DC. He was 87. He was buried in the town of Frederick in Maryland.

Depending on which side you are, Taney was both hero and villain. His attributes as a pragmatic political figure were evident. His skills as a lawyer were undeniable. His love for freedom was displayed by his freeing of all his slaves. He even gave financial support to the elderly slaves. He was a hero after choosing to remain with the US Army during the civil war.

On the other hand, he stifled the powers of state governments. He gave rulings that entrenched slavery into the US fabric.

Throughout his life and career, he stood by his word, however controversial.