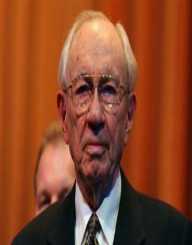 Hinckley was a descendant of a governor of the Plymouth Colony. His grandfather had joined the Mormons in 1839 after fleeing from Missouri to Nauvoo, Illinois. After anti-Mormon forces killed the church’s founder (Joseph Smith) and banished his followers from Illinois, Hinckley’s grandfather was one of those who trekked across the Great Plains to Utah.

Hinckley did a degree at the University of Utah with the intention of becoming a journalist but instead became a missionary and traveled to England where he used to preach in Hyde Park, London.

After two years missionary work in London, Hinckley returned to Salt Lake City. He served as the Executive Secretary of Church Radio, Publicity, and Literature committee, heavily involved in how to present the church’s teachings to would-be converts. After working in publicity for the church for twenty years, he was then put in charge of the missionary program for seven years. Hinckley also served as a counselor to three church presidents: Kimball, Benson, and Hunter.

On the 12 March 1995 Gordon B Hinckley was appointed Church President. During his tenure as president, the church saw the most intense temple building programme in its history. He also traveled the world to meet church members and used television and press publications to put the message of the church across. Under his leadership, ninety-five new temples were dedicated.

During his more than four decades in leadership roles, Hinckley was the 15th President for twelve years as well as being the oldest president in the history of the church.

Marjorie Pay Hinckley, his wife, died in 2004. They had been married for sixty-seven years.