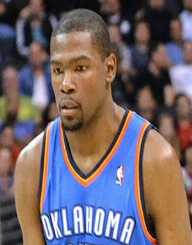 Kevin Durant is an American basketball player who plays for the Golden State Warriors.

Kevin Durant was born in Suitland, Maryland on 29 September 1988. He is the son of Wanda Durant and Wayne Pratt; they divorced while Durant was still young. Durant has two brothers, Anthony and Rayvonne, and one sister, Brianna. His grandmother, Barbara, helped raise Durant and his siblings with his mother. It was his grandmother who encouraged him in his basketball as a youth. Durant supported the Toronto Raptors as a child.

Kevin Durant attended some high schools and played basketball for them all. He studied and played at the private school, Montrose Christian School, in his senior year. Durant went on to attend the University of Texas in Austin.

Durant only played one year with the Longhorns, but put up eye-catching statistics. He averaged 25.8 points and 11.1 rebounds per game. Durant won all the national awards for college player of the year and was the first freshman to do so. He declared for the 2007 NBA draft.


Career in the NBA

The Seattle SuperSonics selected Kevin Durant as the number two pick overall; the Portland Trailblazers made Greg Oden the number one pick. Durant made his debut against the Denver Nuggets. Durant started eighty games for Seattle and won the NBA Rookie of the Year Award. He also became the third teenager to have an above twenty points a game average. The SuperSonic relocated to Oklahoma in 2008 and changed their name to the Oklahoma Thunder.

Kevin Durant was joined by Russel Westbrook, who was drafted by the Thunder. Together the two would form a dominant partnership. Durant averaged 25.3 points a game in his second year. The following season Durant again improved his scoring statistics as he averaged 30.1 points a game, this saw him lead the league in scoring. The Thunder won 50 games and squeezed into the playoffs as the number eight seed in the Western Conference. They were defeated by eventual champions the LA Lakers in the first round.

Durant was named in the All-Star game for the first time following the 2009-10 season. Durant signed a five year eighty-six million dollar contract with the Thunder in 2010. He again led the NBA in scoring as the Thunder improved their standings finishing with fifty-five wins and the 4th seed in the Western Conference. Durant was involved in his first playoff series win as the Thunder beat the Denver Nuggets 4-1.

A player lockout shortened the 2011-12 season, the Thunder advanced to the playoffs with a 47-19 record. They were the number two seed in the Western Conference. They exacted revenge on the Dallas Mavericks, sweeping them in the first round. Durant and the Thunder cruised past the LA Lakers in the second round, winning 4-1. The Thunder clinched the Western Conference by defeating the San Antonio Spurs 4-2.

In the finals, they faced the LeBron James led Miami Heat. Kevin Durant averaged 30.6 points a game in the Finals, but it was not enough to prevent the Thunder falling to a 4-1 defeat. For the third consecutive year, Durant was the leading scorer in the NBA.

The next season the Thunder clinched the Western Conference first seed with a 60-22 record, bettered only by the Miami Heat. In the first round of the playoffs, Russel Westbrook suffered a season-ending injury. This meant the Thunder’s hopes were placed squarely on Durant’s shoulders. They defeated the Houston Rockets but fell to the Memphis Grizzlies in the second round.

The 2013-14 season would mark the highpoint of Durant’s career so far. He averaged 35.9 points per game and broke the record for most consecutive 25+ point games. The Thunder finished second in the Western Conference regular season standings. Westbrook regained his scoring title and was also named league MVP. In the playoffs, the Thunder defeated the Memphis Grizzlies and LA Lakers on their way to the Western Conference Finals. They were beaten 4-2 by the San Antonio Spurs who would go on to win the Championship.

Kevin Durant was curtailed by some injuries during the 2014-15 season and was limited to just twenty-seven games. After the disappointment of the 2014-15 season, Durant put in some show-stopping performances with Russel Westbrook the following season. They became the first pair of players to both scores forty points in a game in nineteen years. Durant averaged 28 points a game, and the Thunder advanced to the playoffs.

Durant had both one of his worst ever displays and one of his best in the playoffs. Against the Dallas Mavericks Durant missed 26 of his 33 shots. However, in the next round, Durant would drop 41 points in a win over the San Antonio Spurs. The Thunder made it to the Western Conference Finals, where they faced the record-breaking 73 win Golden State Warriors. The Thunder took a 3-1 series lead but still lost out to the Warriors.

Kevin Durant first made an appearance with the National team at the 2010 World Championships were the USA claimed gold. He was selected for the USA basketball team sent to the 2012 Olympic Games in London. Durant became the highest scoring player in Olympic history as the USA took Gold. Durant again won gold at the 1016 Rio Olympic Games.

Kevin Durant was engaged to Monica Wright. Wright plays with the Minnesota Lynx WNBA team. Durant is a practicing Christian. Durant is endorsed by Nike, Gatorade and 2K Sports and many others. Durant donated a million dollars to the Red Cross in 2013 following an appeal for tornado relief.

Durant plays small forward. He is officially listed as being 6 foot 9 inches tall, but Durant claims to be seven feet tall when kitted out. He weighs 240 pounds.